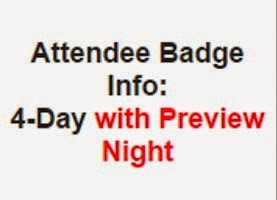 
Emerald City
Let's start with ECCC. I advise making 2020 your first year at ECCC if you've never been and you like comic books. You can read why here.

As for the ticket sale - it's a fairly simple process. When tickets go live on noon PST 23 October, you will join the queue and buy the tickets of your choice. While 4-day tickets will probably sell out in real time, you should be able to buy all four days separately if you're there in the mix. You can also book your hotel right then, which I highly advise.

For now, subscribe to their newsletter. And think big picture about your Con destinations in 2020 - because unless you have unlimited leisure time and unlimited funds at your disposal, you'll need to pick which Cons to prioritize. Don't be afraid to mix it up. 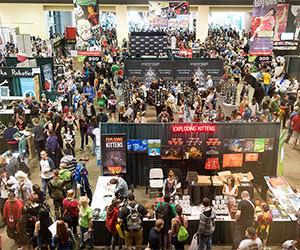 Onto SDCC. Returning Registration is approaching - a day that rivals an ancient Pagan celebration in its capacity to inspire dread and jubilation. This sale is only for attendees who swiped their badge at SDCC 2019 - also known as SDCC50. (I don't feel that ever really took off, but that's how CCI wants us to think of it.) Since you've already been through a badge sale, you know the drill. Just remember to get your money in order and communicate clearly with your buying group. Last year's RR was the worst I have ever experienced in terms of collecting $$$ from the people whose badges I bought, and it almost turned me off from ever participating in a buying group again. Don't be that person.

Dates: Because this year's junior badge validation emails aligned with last year's, it's tempting to think that Returning Reg this year will also align and take place on Saturday, 12 October.  (Last year was the 13th.) But CCI is a saucy minx, so don't bet the farm on that date. As someone who needed to pick an October weekend for Disneyland, I did choose October 18-20 as safe dates to have the sale over with. I'd guess the 5th at the earliest and say the 12th is the most likely. I'd definitely keep your Saturdays on those 2 dates open. (Hard to do if you're NYCC-bound.) But anything is possible.

For you first-timer hopefuls who want to go to SDCC next year but were not an attendee this summer, you'll need to wait for Open Registration. That's also likely going to happen this fall, so make sure you've created a Member ID for yourself and your companions.

Taking a Gap Year
I want to address those of you who are in the middle - you think you want to go to SDCC 2020 but you're not sure but you don't want to miss out, but but but. There seem to be quite a few attendees contemplating a Comic-Con gap year. Was it because this year was a bit contentious? Are we restless for new lands to conquer? I guess the reason doesn't matter - only that a healthy number of people have mentioned it to me, and they're worried that once they step off the SDCC train they'll never be allowed back on. It's a reasonable fear.

So if you're currently vacillating, remember this:
1) You can always turn your badge in for a refund.
2) If you do jump off the SDCC wheel of fate and can't catch it again - there are other Cons you can go to and fan fests like D23. Also, I feel that we've reached Peak Con in terms of SDCC demand. I could be wildly wrong about this, and obviously it's still very difficult to get a badge. But I do think that even if you flunk a few badge sales, you'll eventually be able to claw your way back in by working with the right people.

Back to what matters. It's officially badge sale season! Prepare for the worst, hope for the best and stay tuned.
Posted by Valerie