A road closure at SDCC - just for us 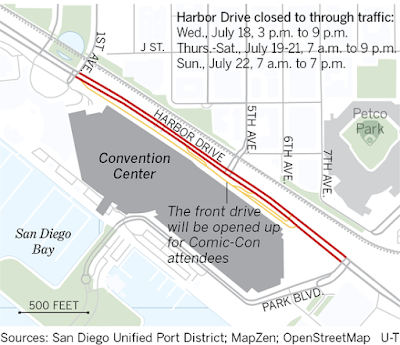 In the battle between San Diego traffic and San Diego Comic-Con attendees, a small victory went to our side today. The section of Harbor Drive between First Avenue and Park Blvd will be closed to all traffic during the Con except for shuttles and emergency vehicles. (No bikes, scooters or skateboards, either.) The shuttles will be on the actual road. And the area where we used to see the shuttle buses? That's just for us now, giving us another 34 feet of room beyond the walkway.

First-timers, if this all sounds trivial to you - you'll see how much of a difference this can make when you arrive. Depending on the hour, the area in front of the Con tends to be packed with various lines, general crowds waiting for access, cosplayers posing for photos, media crews and attendees hustling to and fro. (Once our bible-quoting doomsday friends were there too, holding up their signs, but they've been banished and can now be found scowling in the Gaslamp.) And as you can see in the photo below, our foot traffic amounts to a parade just crossing the street. 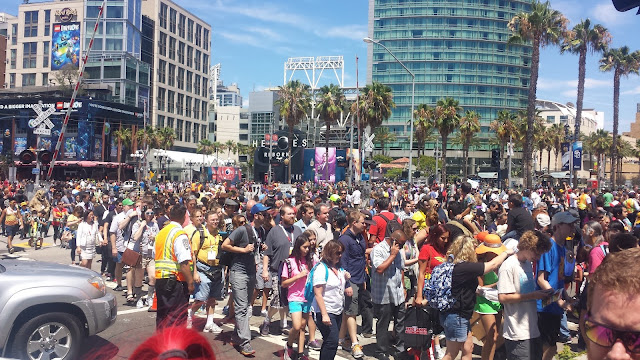 Because it's 2018, this is also a security move. Only badge-holders can be in the expanded area. With concerts and other large gatherings marked as a terrorism target, Con officials have been instituting tougher measures all over the country. CCI has previously enlisted outside help to keep everyone safe - and this is another way to protect attendees and the convention center. In the words of Lt. Brent Williams of the San Diego Police Dept:

"If someone planned an attack, this could be a perfect place if this wasn't shut down. Because of what we've seen around the country, this is a way to protect attendees. Also, in the event of an evacuation, we could get our first responders there more quickly."

Makes sense - especially for those of us who just lived through a Comic-Con evacuation. (Ahem, Phoenix Comic Fest.)

If you have any questions about this change - about entering the Marriott, about being a member of the media, about ADA access, about parking - please read this FAQ. It answers pretty much every question you can think of.