Early Bird Hotel Sale is on 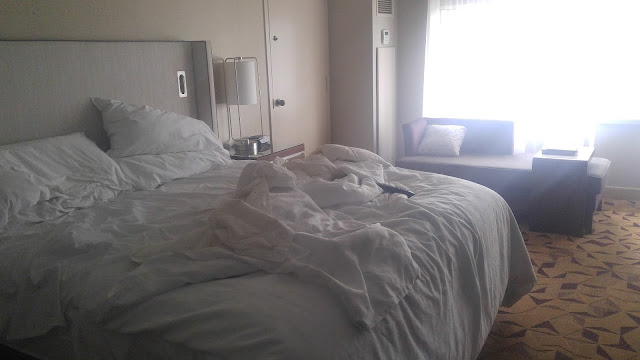 If you scored a badge in Returning Registration and you want to spare yourself from entering the hellmouth that is the SDCC hotel sale - then you'll be happy to hear the Early Bird sale is on.

What it is: your chance to book a room now at the hotel of your choosing. The catch: the hotels are not downtown. Most are on the shuttle route and they tend to be reasonably priced, though, so this is a good option if you're not aiming for the Hilton Bayfront. The other catch: you have to pay upfront and it's non-refundable.

As always, I have to recommend the Sheraton San Diego Hotel & Marina. It's a quick shuttle ride to the Con (3 miles or so) so you don't have that same stranded feeling you can get out on Hotel Circle. I stayed there in 2005; it didn't impede my social life at all.

I know a lot of you don't have a badge yet, or you're hoping to upgrade in Open Reg - so you don't know if you should jump on this or not. One option is to split the reservation with someone and book just the weekend or Weds/Thurs; then you can still come down, do the outside events if you don't get a badge, and not waste a lot of money. If you do get a full badge, you can look for a downtown hotel for the other days. Or you can book all 4 days and find someone to take over your reservation for you if you get lucky elsewhere.

We all know the hotel sale has become increasingly hellish each year - so don't write this off. I know we all want to stay at the Marriott Marquis, but it's an option for only a tiny percentage of us. If you don't have the stomach for the horror of Hotel Day - Early Bird is your best bet.

ETA: Early Bird typically lasts a few weeks. With Open Reg in early April, it'll probably still be live then, end shortly after the badge sale and be followed by Hotel Day a week or so later. Just my theory.