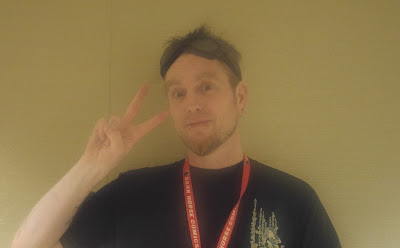 Interview time! You may know Zach Davisson from his work for Dark Horse, Drawn and Quarterly, Wayward,his numerous books, and his translations of Shigeru Mizuki. He's an interesting writer for many reasons, but I wanted to talk to him in particular about his ability to pursue a specific passion - in his case, Japan and the supernatural - and turn it into a career. So we talked at Emerald City Comicon about comics, ghosts, the creative life and committing to your passions. Here's what he said.

I was just having this conversation with someone. I curate my material. Like, if I take on a project, it has to be something I'm emotionally involved with. I turn down a lot of work, not necessarily because there's something wrong with it but because it's not me, it's not in my wheelhouse. I'm not going to do a romance comic because I don't think I would do a good job at it, it's not in my skill structure.

So much of working in comics is this lonely life, sitting at a table with a computer; you have to love it. I put a lot of myself into all the work I do. I think it's important that you aren't just a gun for hire, that you're attempting to curate your bookshelf. So when I translate or write something, I think of it as a Zach Davisson Production. Which sounds a little pretentious, but that's how I think of it.

Where does your interest in Japan come from?

When I was like 7 or 8, my mother conned me into going to see the movie Seven Samurai. It was the first time I heard a foreign language spoken and I was fascinated, wondering what it was like inside their heads. This gobbledygook made sense to them and they could think in it.

From then on out, I was fascinated. In my third grade class picture in 1983, I'm wearing this t-shirt that said JAPAN on it. So it's been a fairly lifelong thing for me.

When did you go over and live there?

I was much older - 31, 32. It was one of those things when I'd been trying to study Japanese for a long time and I realized that going to school will only get you so far. If you want to make a commitment, if you want to do it, you have to jump into the deep end of the pool.

So I moved there and it made me realize that stuff I'd seen in America is carefully curated by the publishers. You're not getting a general sample of what's available, you're only getting what the publishers think will sell. So when I moved there, I discovered Shigeru Mizuki who is so omnipresent in Japan. He's a foundational part of the culture, like on a level with Walt Disney or the Brothers Grimm here. But even people who are into manga here have never heard of him. That was a shock. One night I was with a friend and I had too much to drink and I climbed on a table and said I am the one who will bring Shigeru Mizuki to the West! I made this big announcement. And then I got back and went to all these publishers and it took years - but I finally did it.

Wayward was interesting because I always loved American comics as much as I loved Japanese comics. Someone heard that Jim Zub was doing this new comic about supernatural Japan and wanted someone who could be a consultant and maybe write an essay for the first issue. I only knew Jim Zub as doing the comic Skull Kickers, so I was terse in my first response to him: Sure, I'll look at your script.

And it was really well done. It was clear he'd done a lot of research. It impressed the hell out of me. So I wrote him back that not only would I write an essay for his first issue, I would write one for every issue going forward. So I just kind of invited myself onto the team permanently. And we've gotten to be good friends and I think the comic is phenomenal. 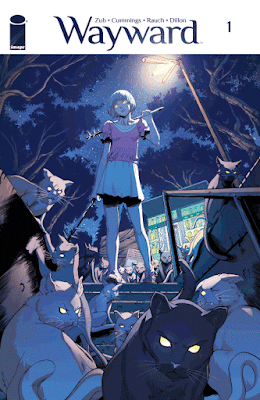 Separate - I've always liked ghostly, spooky stuff. I used to watch this show called In Search Of, I always loved Bigfoot, folklore and the supernatural and Greek myths.

But when I got to Japan, it was like I'd hit the jackpot. Japan has so much folklore and it's a living part of the culture in a way it's not in the West. And the more I explored it, the more I realized a lot of it had never been made available to an English-speaking audience. And I thought again about being a gateway for that work.

Do people get personal with you about their ghost stories?

Yes, totally. I love ghost stories. I tell mine too.

Can you tell one now?

My wife and I lived in a haunted apartment in Japan. In Japan, if your apartment is haunted, it has to be listed as a haunted apartment. It's part of the law and that makes it cheap. So we lived there and it was officially spooky. We'd hear weird noises and so on. We had quite a few ghost experiences.

What do you have coming out in the future?

My next book coming out is about the supernatural cats of Japan. I amassed all this knowledge about cats from Wayward, so I said to my publisher, why don't we do that. Hopefully that's coming out this year.

That sounds incredible. For fans who are into your work, what would you recommend to deepen their knowledge of Japan and other areas?

You heard it here, kids. Don't pirate. Last question: what advice do you have on turning your passion into a livelihood?

... Pure willpower. For me, the career I wanted didn't exist.

You'll be rejected multiple, multiple times. I got rejected by every publisher you can think of. If you quit the first time someone says no, or the 10th time, you're in the wrong business. Use the options open to you. I made a website and networked and slowly those "Nos" began to turn into "Yeses". It really takes the first person to take a shot at you and then you have that proven success and you can slowly build on it.

It takes a lot of patience. Someone asked me about this recently, about how long it might take, and I said it took me about 7 years from deciding to be a translator to my first book. I could tell from her face that wasn't the answer she wanted to hear - she wanted to hear "next week."  But this is not a "next week" career.

It takes perseverance, patience and willpower. And talent - if you can't do the work, it doesn't really matter.

Thanks, Zach!
Posted by Valerie