What you need to know about SDCC hotels 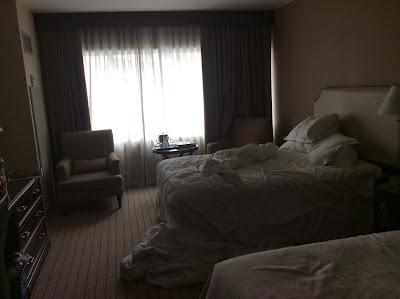 If you scored a badge to San Diego Comic-Con on Saturday, your thoughts have probably turned to hotels. There are 2 top truths you should know right off the bat:


If your hotel situation knowledge comes from the Twitterverse, you probably think it's a bloodbath where there are only a few rooms to satisfy the hordes of attendees, who are scratching and clawing their way into anything with 2 pillows and a minibar. That's not true. It's just that most of us want to land at one of the closest hotels - the Hilton Bayfront, the Marriott Marquis - and those rooms are in very short supply.

However, you can get a good hotel room at a reasonable price and get free shuttle service to boot. I feel like this gets overlooked every year, but it's true. So here are your 3 main options:


#1. Participate in the Early Bird sale.

CCI offers a bunch of hotels at discount rates via the Early Bird Sale. These rooms go slowly because they're not downtown - they involve a ride on the free Comic-Con shuttle. They are some of the lowest-priced SDCC hotel rooms you'll find. The drawback: you have to pay for all the nights upfront and it's nonrefundable. However, if you're definitely committed to going to SDCC (and I'm pretty sure you are) that shouldn't be much of an obstacle since you generally have to put some kind of deposit down no matter how you book. Early Bird is a peaceful, budget-friendly option compared to the next two, and I really recommend it.

When to expect it: very soon.

If you thought Saturday's badge sale was stressful, Hotel Day is worse. It's first come, first serve, a principle torn asunder on last year's Hotel Day by hang-ups, weird pages that shapeshifted into alternate forms and of course that SDCC classic, getting the digital boot. It was really quite stunning to witness. I'm going to assume CCI has somewhat patched up the system (and it's possible they scrapped it and came up with more of a lottery one) and that it will go more smoothly this year. You might be asking yourself: why would anyone put up with this? The answer: for a shot at a downtown room. The fact that it's somewhat reliant on skill/speed and not just luck makes many people positive they'll prevail.

However, there is still an element of chance. Not just in accessing the system, always a gamble, but also in that you'll be asked to pick 6 hotels from a list. A few days later you'll get an email telling you where you've been assigned. Yes, that's actually how it works. You might read something great like the Omni, you might read a hotel you've never heard of like Humphrey's Half Moon Inn, or you might read - as I did last year - that all hotels were assigned by the time I submitted my form. (180 seconds from the sale going live, FWIW.)

After you live through that, the system opens back up and you can dig around and see what rooms are available. They generally aren't that great. Last year there was a side option where you could book those top-shelf rooms at the Marriott and Hyatt and Hilton but without the CCI discount. Not only that but last year - this actually happened - the official page never went live at the advertised time, leaving most attendees waiting and waiting. In the meantime, other scrappy attendees fished out an old link, found it worked, and went in and started booking rooms.

Seriously - do Early Bird if you can.

When to expect it: this will happen after Early Bird, probably in the latter part of March.

It's an option. There are some hotels that don't participate in CCI's plan and others that do but keep a few rooms for the public. Most are booked by now. Still it doesn't hurt to call around and see what you can get. My first-timers booked a downtown hostel for a very cheap price last year at a very late date. And there's Airbnb but of course be careful with how you handle that.


I'll get more detailed on the nuances of SDCC hotels as we go on but in the meantime, you should be thinking about these options right now. Early Bird will probably happen very soon so stay alert and be ready to make a decision on your hotel choice.
Posted by Valerie