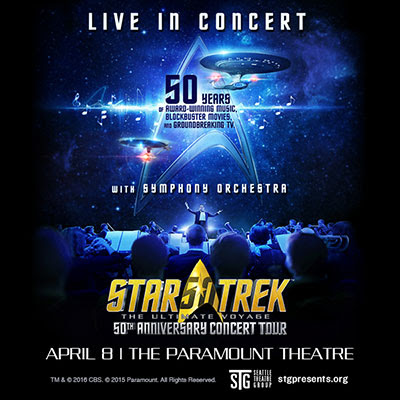 You know who's been neglecting her Emerald City Comicon blogging? Me. So allow me to rectify that now and tell you to buy your tickets - at a 15% discount, natch - for a wondrous Star Trek concert at (or next to) Emerald City Comicon. Just use promotional code "ECCC."

What: Star Trek: The Ultimate Voyage

Where: The Paramount Theatre, next to the convention center

If you want to celebrate the 50th anniversary of Star Trek, this is the way to go. "This lavish production includes an impressive live symphony orchestra featuring the franchise's groundbreaking and wildly popular musical achievements while the most iconic Star Trek film and TV footage is simultaneously beamed in high definition to a 40-foot wide screen."

We'll probably hear about more ECCC events over the coming weeks, but this is definitely a top option for your Friday night.

Get your tickets now. And don't forget your promo code.