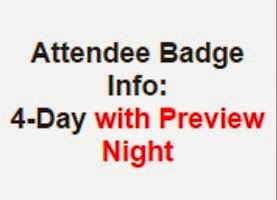 The night before I went to SDCC, I met someone who had never heard of it. That doesn't happen too often these days, and I found myself at a loss as to explain it adequately. "Pop culture convention" doesn't really cut it, after all; doesn't describe the cosplay, the panels on space and science fiction and diversity and culture, the rare comic books, the activations, the camaraderie, the parties, the sheer size of it all. So I rambled on about the Conan taping I was going to, the action figures and comics I wanted to buy, and the screenings I wanted to see, and he just said "huh." In other words: it didn't appeal. Then he called last night and immediately said, "I saw your thing on the news. How do you get tickets to that?"

San Diego Comic-Con has that affect on people. As soon as they see the cosplay photos, the celebrity interview snippets, the newcasts of the crowds, they want to be part of it.

If that's you, I have good news and bad news. The good: anyone can try to go to SDCC and that includes you. The bad: it's very difficult to get a badge, so don't count on it.

What matters is that you start preparing now. Don't file this away in the back of your mind until next year, because the next time you hear about badges going on sale, it'll be too late to get one. So here's what you need to do.

This is the easy part - and it's mandatory. Only people with a Member ID can participate in the Open Registration badge sale, which will likely happen next February or March.  Do opt in to receive 3rd-party emails; I know that sounds like you're inviting a flood of annoying spam but in fact that's key to finding out about attendee-only offerings like the Conan O'Brien tapings.

Managing the logistics of SDCC - navigating the badge sale, the hotel sale, parking, understanding when to line up for panels or get autographs - requires knowledge and skill. Try to be impromptu about it and you'll just wind up empty-handed. You do need to prepare. I recommend reading blogs like this one and the Unofficial SDCC Blog and others, as well as the Friends of Comic-Con forum. You don't have to get a PhD in Con life, but you will find out valuable tips.

You might be one of the lucky few to try and get a badge all on your own.  But you'll greatly increase your chances by making friends with other attendees and joining a buying group. Same goes for getting tickets to a Nerd HQ panel, or trading your Conan Pop for an exclusive, or getting into an invite-only party. The way I'm describing it sounds rather heartless and quid pro quo, but the fact is that SDCC attendees are a fun and supportive group of people who go out of their way to help each other. Get to know us; it'll make your SDCC 2017 experience so much better.


#4. Figure out your finances.

You don't have to be wealthy to go to SDCC, but having money set aside will be an enormous help. The badges are pretty cheap - 245 for a Preview Night badge this year - but the hotels are a different story, and you will probably want to buy quite a bit while you're there. Start a fund. Hope that you get lucky in the hotel sale when rooms are offered at discounted rates, but prepare for the possibility you won't.

I know July 2017 sounds so far away. But Open Registration is probably only 7 or so months from now, and once you've got your badge, the following months will fall like dominoes. Do your homework today and next summer you won't be wistfully watching SDCC coverage online - you'll be right there in the thunderous splendor of Comic-Con.
Posted by Valerie