The badge scam game has changed this year 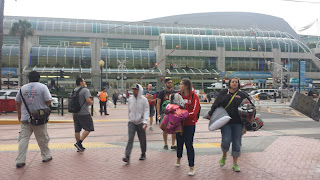 It's that time of year when CCI reminds everyone not to buy fake SDCC badges - or to put it more bleakly, to surrender all hope of attending Comic-Con if they don't have a badge already.

But as you know, the RFID badges have changed the scam game a bit this year and that means people may be more willing to take a risk. Let's review.

Now our flashy new RFID badges are flying around the country in generic white envelopes, changing the time-honored tradition of standing in line to get your badge. (At least for Americans. International attendees will pick theirs up in person still and show ID.) Scalpers know it and the smarter ones have lined up buyers through in-person efforts to avoid CCI's task force that monitors Ebay, StubHub, Craigslist and other sites. So can you buy a scalped badge - or sell one for that matter?


Answer: It's possible, and some people undoubtedly have, but overall it's risky and you shouldn't.

First of all, you have no way of verifying the badge is real. Confirmations can easily be faked. CCI says they're seeing "a huge increase" in international brokers selling counterfeit badges. And even if it is real, CCI can turn it off remotely, rendering it nothing more than a Walking Dead-themed souvenir. There's also the possibility of getting spot-checked by security and asked to prove its your badge (this has happened to people I know so it's not that rare.) CCI will block you from SDCC if they catch you in some kind of badge fraud.

If you're determined to go to SDCC, this probably hasn't persuaded you against buying a scalped badge. But you should really calculate the odds on pulling it off before you hand over your cash.
Posted by Valerie