What did we learn today?


Attendee badges are shipping out in batches. Did you get your email? If so, check the name and address listed to make sure they're correct - a few people are saying their email has outdated information.

Conan is sharing a look at his Pop! figures for Comic-Con tonight on his show. Here's how this works: you get lucky/quick enough to grab a ticket for one of his SDCC tapings; when you attend, they bestow the figure of the day upon you. Then as you leave, creepy collectors step up way too close to you and softly say bidding amounts in your ear. Not exaggerating, it was a bit unsettling last year.

In pilot news, you can see The Exorcist and Son of Zorn at the Con. The Exorcist is being called a "psychological thriller" which tells me it will be stripped of its head-rotating, crucifix-violating disgustingness, but I may give it a shot.


Hotel reservations opened back up. Remember when that actually meant something? The rooms left aren't exactly top-notch, but it is a place to stay during the Con. And remember - while you do need to pay a 2 night deposit, you can still cancel your other nights pretty much up to the last second. So feel free to keep searching out other digs if you don't mind changing hotels midstream.

Titan is bringing you a variety of cute things from Doctor Who, Star Trek and Adventure Time.

Another splashy Thursday night event: The Reuben Fleet Science Center in Balboa Park is hosting a Comic-Con party. To be clear, this is 21+, with cocktails, cosplay contests and IDW creators. Tickets on sale now.

Behold the beating heart of my Preview Night: this Jokerized Batman from Entertainment Earth, my favorite 2016 exclusive so far. 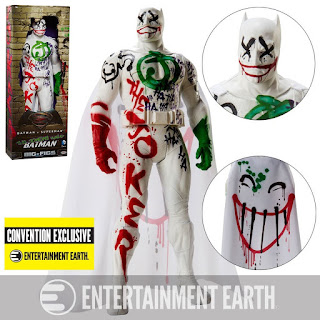 
For those of you who got excited over the Rocky Horror panel, be aware that it's featuring the cast from the Fox special this fall. Not saying that it won't be good, but people are already pre-swooning over Tim Curry and no, wrong cast.

And I'm not sure why everyone is so excited to see Ben Affleck at SDCC, but apparently his imminent arrival is huge news.