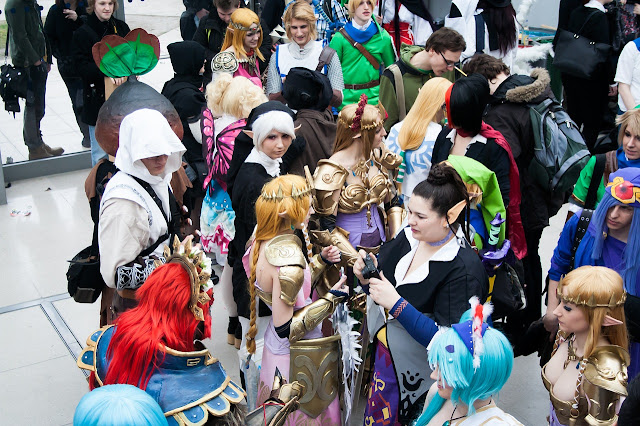 Is this your first San Diego Comic-Con? If so, I want to hear your story.

I always like seeing Comic-Con through virgin eyes - which is why I've collected stories from San Diego Comic-Con first-timers for many years. I like hearing what they thought, their biggest mistakes, their biggest wins, and if they'll try to return next summer.

I've noticed that many people who've been hitting SDCC for a while begin to operate within their own comfort zones and tune out much of what the Con has to offer. We also become accustomed to the inconveniences; we don't even blink when a volunteer sends us to the wrong room or someone's foam wing pokes us in the head. That's just part of SDCC. But first-timers who are used to having more control over their environment can be taken aback by some of the inherent Comic-Con chaos. And conversely, they can be enraptured by small wonders we senior attendees take for granted.

Seeing Comic-Con through fresh eyes also helps all of us experience SDCC vicariously through attendees who don't share our interests. Because there isn't one Comic-Con experience - the gaming couple who focuses on tournaments has a very different Con from the women who camp out for Hall H, who in turn has no idea about the comic nerds bouncing from IDW booth to Image panel to DC signing, who can't imagine what it's like as a cosplayer competing in the Masquerade.

And while you as a first-timer can benefit from the experiences of old-timers like me, you can learn just as much (if not more) from people who were recently new.

So. If you have a tale about losing your San Diego Comic-Con virginity - you loved it, you got a photo with the Riverdale cast, your hotel room was wrong, you lost your cosplay wig - I'm all ears if you want to tell it. Because while I don't know precisely what kind of Con you're going to have, I do know you'll come out of it with some incredible stories.

You can shoot me an email during or after the Con. I'll remind you of this again -  but if you want to get on my list now, let me know by emailing sdccguide@gmail.com.