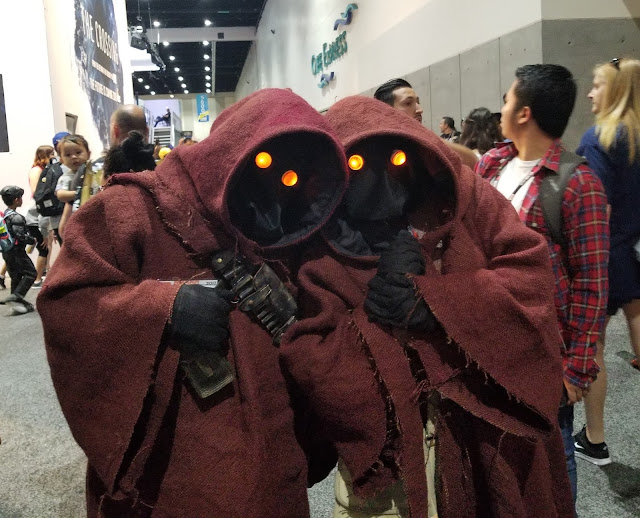 After I posted my first round of 2017 SDCC first-timers, I got a few questions from attendees asking why I didn't include their stories. It turns out Gmail failed to deliver at least 3 emails - not sure why - from interesting people. So here they are.

Sergio is an aspiring illustrator who came to Comic-Con as a comic book nerd. He pawed through various back issue bins, scoured Oni, Drawn and Quarterly, Dark Horse and other publishers for new books, and poked around Artists' Alley - as you do. But it was the panels that impressed him.

"Friends had told me that Comic Con panels are pretty weak and you don't get to see the real artists who are making the best books today. Okay, that was mostly true. But I got to see Jim Lee, Mark Waid and Robert Kirkman. I got to see Jeff Smith. There is a benefit to seeing these people as people like you who found a way to work in this industry. It doesn't need to be a mysterious thing.

I got into the first night with my friend's badge and saw that I could quickly get everything I wanted. There wasn't much that was new to me, although I eventually returned on Sunday to do a longer search. But that first look convinced me to concentrate on panels. I went to workshops on coloring, animation, production and anatomy.

What do I think of San Diego Comic-Con? I think it is an initiation for people who want to find out about working in comics. But I could also see that I would quickly reach the limit of what there is to offer. It's a beginning. I'll go back next year and this time I will focus on meeting people who can help me." 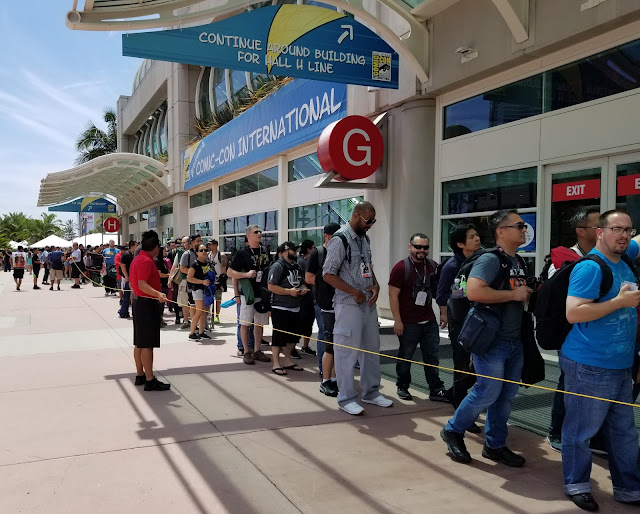 Holley's husband has been an email friend for a few years, so I was able to connect them with some real-life friends as SDCC roommates. She was the first-timer in the group but like others in my previous post, benefited from having an experienced attendee at her side. Her observations are on point: making friends with other attendees is awesome, while other aspects are not.

"I didn't feel like a total first-timer since my husband has been there so many times. And, my hotel roommates (which you connected us with) were also veterans, so I got good direction from them.

My favorite thing was the ease of striking up a conversation with people (usually while waiting in some kind of line). IRL, I feel the need to mediate my conversations and have to feel people out for their level of interest or knowledge of geek culture. At SDCC, I knew that everyone had knowledge and interests, and usually wore it visibly in the manner of buttons, t-shirts, and cosplay. It felt nice to have found such a huge group of "my people."

I also enjoyed the panels. Lots of good info, and I saw some of the celebrity ones as well. I'm a huge Whovian (since 5th grade), so my favs were the Britbox panel with Doctors 5 and 6 and companion Ace, and, of course, the Doctor Who panel in Hall H on Sunday. Capaldi was genuinely moved by the outpouring of love from the crowd. It was a touching send off.

I didn't enjoy the lack of knowledge in many of the volunteers. We were told conflicting info many times about which lines to get in, etc. But, we just learned to ask several volunteers and go with the majority. There also seemed to be a major build-up of trash throughout the day, making it look like the staff wasn't on top of it. But, that could just have been the logistics of trying to get a huge trash container through the sea of people. Finally, lining people up outside in the sun (mainly the Indigo Ballroom) is a bad idea. None of these things took away from the experience at all for me."

Verdict: "I had a great time at SDCC!" 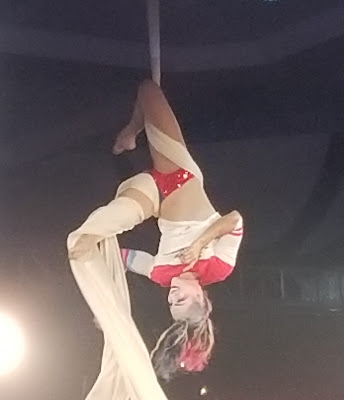 
I met Ryan at the Con without realizing it was his first time. He seemed very chill about a panel mix-up that had his friends in a snit and we philosophized about the need to take a Taoist approach to SDCC. If asked, I would have guessed he'd been coming for years - so I was surprised to get an email stating it was his first one.

One reason he seemed sanguine about the whole circus is that he's been to NYCC several times. Not exactly a novice, our Ryan. So what did he think when comparing the two?

"San Diego is all-consuming. You're never not IN the Con, even when you're walking up the street or going to a club. It's everywhere. We stayed at the Marriott Gaslamp and we could hear people and street noise. There came a point when I wanted to be free of it all. In New York, you can leave Comic Con behind so easily. That is not easy to do in San Diego.

My friends hated the lines, the confusion and the way you had to type your personal info into iPads. I gave a fake name and email so I didn't care. While there are more comedy shows and readings at NYCC, and it's more like two weeks of special shows, they don't have the kind of Netflix and Blade Runner offsites like at San Diego. Again, it's that consuming feeling. It's like being in a casino. You lose your perspective of the outside world.

I will try for a Preview Night badge. You said it was crowded, I thought it was the least crowded day of the Con. I want to do more of the programming next year instead of wasting time waiting for the big panels and offsites. But if we only get Thursday or Sunday or don't get a good hotel, we'll cancel."


And that's it for 2017 first-timers. There doesn't seem to be a common theme - they don't like the lines but neither does anyone else. Most of them seem to think it was a worthy trip; some aren't going back and that's okay. San Diego Comic-Con isn't for everyone and I don't understand why some attendees get so defensive when it's criticized. I think for many people, it's a bucket list destination where one visit is enough - and for many of us, it's an annual rite and essential part of our summers. Some veterans reach the end of their interest and that's okay too. What matters is that attendees find a way to make Comic-Con work for them when they're lucky enough to be there.