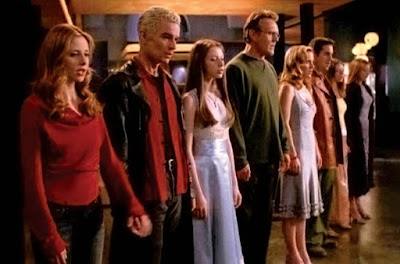 It’s Sunday: kid’s day at Comic Con, the day of the best dealer’s floor deals, and the time to say goodbye. What do we have to console ourselves with?

Hollywood
Hall H is business as usual: Supernatural kicks off at 10:30; The Last Ship takes over at 11:45 and then there’s BBC Dirk Gently’s Holistic Detective Agency at 1 and finally Doctor Who at 2.

What a nice way to start the day: Carrie Fisher gets a special tribute at 10 in room 6DE.

It’s a very Buffy year. If you didn’t get enough at the Buffy Fandom party the night before, you can talk slayers at noon in 7AB.

Firefly fans are meeting at 1 in the Marriott.

Stephen King’s bestselling novel Mrs. Mercedes is becoming a TV show, and you can meet the cast at 1:30 in room 8.

Starship Smackdown is back in the ultimate fan battle: 2:15 in room 6A.
More Buffy, this time with your favorite episode: end your Con on a high note in 3:15 in room 6BCF. 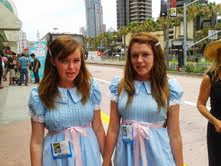 At the Cartooning Snack Shop, kids learn to draw cartoon characters using fruit as models. In room 11 at 10.

For all ages: Disney veterans show How to Make A Comic in room 2 at 10.

Creating Comics with Kids offers a hands-on workshops for your school-age youngsters. Room 11 at 11.

“Monsters, Mayhem, Magic, and Machines for the Next Generation” is at 11 in 28DE.

Find out how to use colored pencils in a hands-on event at 2 in room 28DE. All ages are welcome.

I actually forgot we were getting an Emily the Strange film. Creators talk about the film and the comic in room 32AB at 10.

The Lumberjanes panel is at 10 in room 25ABC.

We have another Jack Kirby panel at 10 in room 5AB.

“Comics Beyond the Wall”  feature Eisner Award winners Gabriel Bá and Fábio Moon on “how everything can be mixed together to end up with something unique and outstanding.” Room 29AB at 11.

Show off your Korra knowledge in a panel and trivia game at noon in room 24ABC.

Find out “what it's like working as a woman in comics today and what it means for the future of the industry” by talking to Marvel women at 12:30 in 6DE.

What’s going on with comics in Latin America? Find out in “Chicano Comics” at 1 in 25ABC.

Get a look at upcoming Image Comics projects at 1:45 in room 5AB.

ComiXology peddles their Unlimited subscription service in “So You Want to Start Reading
Comics?” while writers tell you where to get started. 2:00 in room 29AB.

Some comics promote global awareness and support for the UN's sustainable development goals. Join the cause in “United Nations + Comics = Saving the World” at 2:30 in 23ABC.

“Women Creators Breaking Stereotypes” talks about “creating female heroes, what they think about when creating a female lead or collaborating on female superheroes, and what they foresee happening to female stereotypes in the future.” 3:00 in room 32AB. 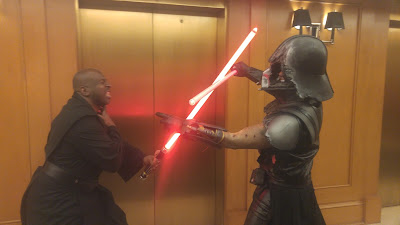 The Christian Comic Arts Society is meeting at 10 in 28DE.

Duff Goldman from Food Network talks about: the explosion in popularity of nerd-themed cakes and weddings, how Instagram changed the way we view food.” Marriott at 11.

We talk about diversity, but has there been an impact on comics creatively? Economically? Find out in “A Conversation about Inclusivity and Diversity” at 11:30 in room 8.

“Mental Health and Comics” talks about reversing the stigma of mental illness in room 2 at 11:30.

“Bizarre States” explores “the weird, wacky, and wonderful world of the paranormal, true crime, occult, and just plain odd.”  Yep, that’s a Sunday panel. 1:00 in 6A.

How do you raise heroic girls? A panel of experts will decide. In the Marriott at 2.

Super Asian America will talk whitewashing, the success of Asian leads and other relevant topics. 3:00 in 29AB. 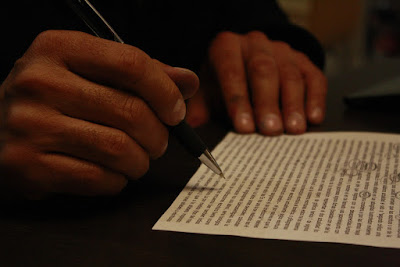 The “triumphs, sorrows, tricks, and craft of illustrating comics.”  At 11 in room 24ABC.

Fanfic writers can discuss its “healing, restorative qualities for readers, writers, and fans.” Noon at the Marriott.

If you dream of writing fantasy novels that one day show up at a multiplex, visit room 8 at 12:30.

“Full-Time Creative Work on a Part-Time Schedule” is at 4 in room 24ABC. 1 attendee will win a year’s subscription to Adobe Creative Cloud.

Moving Beyond the Strong Female Character: how to get “Well-written, fully-developed women in their media.” 4:00 in 32AB.

Polish your pitching and self-promotion skills at 12:30 in room 2.

How did DC writers and artists break into comics? Find out in room 6DE at 1:45. 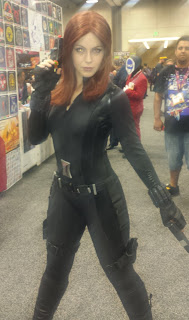 You can find out how to build your own droid at noon in room 11. This panel claims it will be “fully functional.”

Pessimists and dystopia fans, go to room 25ABC at noon to discuss how “The Future is Bleak”.

Here’s your chance to dialogue with CCI on a very primal level and share all those bloodthirsty thoughts you had during the hotel sale. “Comic-Con Talk Back” gifts you CCI president John Rogers, who wants to hear your most honest and brutal thoughts. 3:30 in 23ABC.

And that's it! We're released back into our regular lives and worrying about Returning Registration.

So what do you think of the panels overall?  I'll share my thoughts tomorrow. 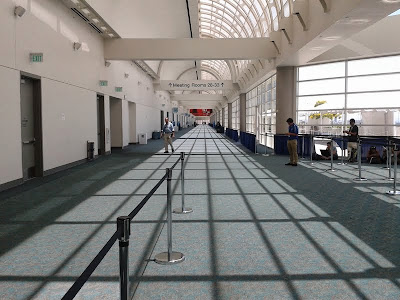