What to wear to Comic-Con


This year I hardly know any first-timers personally. It seems that as scoring badges becomes a matter of working in tribes, first-timers are becoming more and more rare. But I do know one couple and they had what seemed to me an odd worry: wearing the wrong thing to San Diego Comic-Con.

Let's just get this out of the way. No one is going to mock your outfit at SDCC. It's not a cotillion, Comic-Con attracts a very independent-thinking crowd, and everyone is too intrigued by what's going on around them to even notice your wardrobe.

That said. If you're new and you're stressing over what to wear, I'd advise playing an Exhibit Hall video like the above so you can see what other attendees wear.

Nerdwear: If you travel in geeky circles, you may have been challenged to prove your knowledge about the gaming character or superhero on the shirt you're wearing. We've all run into alpha nerds who like to make people feel inadequate about the depth of their knowledge. But you don't have to worry about that at SDCC - most everyone is pretty chill and when someone spots a fellow member of their fandom, the reaction is usually just congratulatory. Wear whatever you want.


Cosplay: Even if you love your costume and the way you look in it, definitely bring alternate outfits just in case. You may get sick of being stopped to have your picture taken, or you might get hot and itchy. Or you could just sort of deteriorate and look less magnificent as the day goes on due to wig issues, broken weapons, etc. Experienced cosplayers know their limits, but newer ones tend to want to get back to street clothes faster than they think. 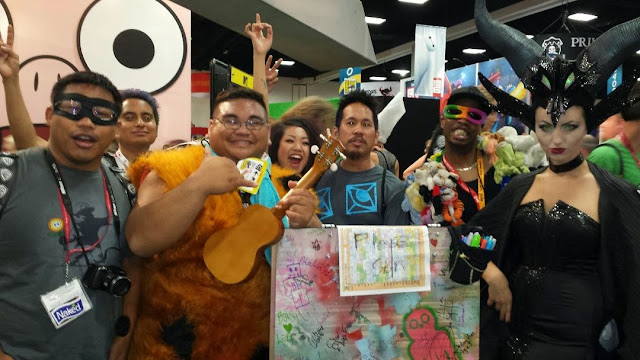 Formal wear: I used to shop for Comic-Con like it was a red carpet event, bringing an array of day and evening outfits, with different heels for each. Now I'm a lazy dresser because who cares? But if you lead the kind of fancy life where people might whisk you off to some kind of formal event, go for it. One note: if you typically rely on the Nordstrom at Horton Plaza for last-minute clothes and LBDs, be aware it closed last summer after the Con. I have no idea what's there now.

Shoes: Obviously bring something cushiony and comfortable. If you're really into flip-flops, be aware your toes may be stepped on when the Exhibit Hall gets crowded. If you don't have a pair of supportive shoes already, I would buy them now and wear them every day to break them in before next week. Otherwise you're just asking for blisters.

Weather: As someone who gets cold easily, I find San Diego nights chilly. I always bring a hoodie and an extra sweater. If you're planning on spending the night outside, I would advise bringing something warm to wear, in addition to whatever blanket or sleeping bag you've got. If you're going to camp through the day and night, the obvious answer is layers so you can disrobe or bundle up as needed. 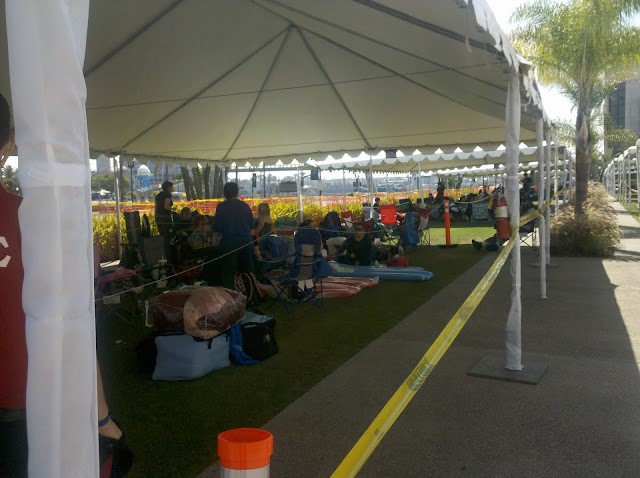 Amount of clothes: Don't count on being able to do laundry. I know people who will bring two shirts and alternate, but you have to take into account how grimy Comic-Con can be. You're going to be brushing up against people, leaning against walls, sitting on grass, sitting in seats a sweaty person just sat in, hustling through the Gaslamp under a hot sun, and basically sullying yourself in incremental stages all day. I can't wait to shower the Con off me before dinner and there's no way in hell I would wear the same thing that night.  You may be less squeamish than I am, but you'll still want to make sure you have enough clothes.

Makeup and sunscreen: If heavy makeup is part of your cosplay - or you just typically wear a full face everywhere - be aware that the Exhibit Hall can get humid and that the hustle between rooms, or between the convention center and the Gaslamp, can leave your makeup in a smeary mess. That goes double if you're wearing a wig or any kind of headgear. What works in your air-conditioned office can be streaky and melted by 11 am at the Con. Try to account for that in advance with fixative sprays or bring a repair kit. And because it's easy to find yourself in line outside longer than you thought, be sure you have a good supply of sunscreen as well.

Backpacks and purses: No one wants to saddle themselves with some massive bag at Comic-Con, but it's hard to avoid. Not just the stuff you buy and carry around, but having a big enough backpack or purse  - because it's kind of essential. Your extra phone battery, your water bottle, your sketchbook, your program: the more stuff you can keep with you, the longer you can avoid going back to your room.


Basically, the goal at Comic-Con is to endure. We all tend to acquire a rumpled, tired look as the days go on and no one cares. You'll just want to be dressed so you can meet whatever daytime or nocturnal situation arises and do it comfortably.
Posted by Valerie

Labels: cosplay, preparation, what to wear