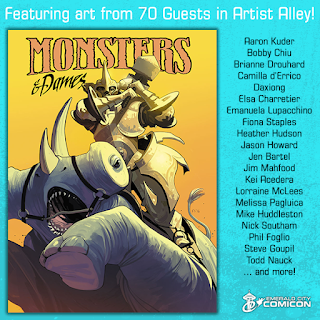 Two months from today you're going to be immersed in the glory of Emerald City Comicon. Maybe you'll be competing in the ECCC Western Championships of Cosplay; maybe you'll be prowling Artists' Alley after two days attending the Schoolism Live Workshops; maybe you'll be in a gaming tournament or bathing in the celebrity glow of the Main Hall.

Two months is not long at all. At the same time, the final weeks before your favorite Con can feel interminable when you just want to be there already.

So here's one way to enjoy an advance taste of Emerald City. The Monsters & Dames book is back to dazzle you with work from 70 top artists. Take a look at the talent involved and you'll get a glimpse of the beautiful art awaiting you in April.

If you're not familiar with the book, it's a hardcover, limited edition, full-color book that's raised over $95,000 for Seattle Children's Hospital. Only 1,000 copies are available so don't hesitate if you want to get your hands on one. Order now and you can pick it up at the Con.