What have we learned about SDCC these last few days?

Like we knew it would, Scream Queens is coming to SDCC. I'm calling this a top panel simply because I think a lot of people will be interested.

Minority Report will be there too; so will American Horror Story, American Dad, Family Guy, Bob's Burgers, Salem, Sleepy Hollow, The Simpsons and Bordertown.

On the exclusives front, this Secret Wars Hot Wheels set will be there too. Square Enix is also bringing this imposing-looking Batman Arkham Knights.

It's kind of hard not to love this figure of Spock swimming with whales.

If you're looking for something to do on Friday or Saturday at the Con, maybe you'll want to go to Mashable House at Luce Loft to "save the Internet." There you will mingle with "the biggest heroes and villains from pop culture, digital media and the Internet." Tickets available now.

Oooo, racy: there will be a Science Fiction and Sex panel at the Con and Marisa Acocella Marchetto will be speaking about her new graphic novel Ann Tenna - "set in the world of fashion, gossip and the universe." So like Intergalactic Kardashians maybe?

Heroes Reborn will also have a panel at the Con. I know some fans are excited about this but reactions seemed mixed - maybe because it hasn't been quite long enough for nostalgia to set in and everyone is still deep in their feelings about how Heroes ended. Anyhow, Zachary Levi is in it, so let's assume this will get some love at Nerd HQ too.

Jhonen Vasquez is back with a special SDCC variant of Invader Zim #1. Only 3000 copies are available.

Hallmark's Comic-Con exclusives are out, including Alien & Batman ornaments and some tiny Star Wars sets. That's Boba Fett and Han Solo in carbonite you're looking at, if you couldn't tell by Han's anguished expression. 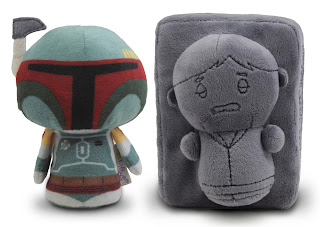 And because it's oddly comforting to know even award-winning artists share our badge sale struggles:

Illustrator Dan Santat won a Caldecott Medal and said his sons were "more thrilled that I managed to get San Diego Comic-Con guest passes for everyone in the family this year." Highly understandable. Then he goes on to say: "The convention did this weird online 'waiting room' thing where you were picked by lottery to get guest passes. Many of my friends ended up getting hosed. It was stressful."

Incidentally, I met a guy at Phoenix Comicon who failed to get a single badge - along with his 2 friends - both in Pre-reg and Open Reg. That's 6 tries, 0 badges. But through "a friend of a friend" he managed to buy a badge a few weeks ago via email from CCI. Sometimes it really is who you know.

In just a few days we'll be flooded with the inevitable "A month from today we'll be at Comic-Con!" tweets and posts. And we'll all feel slightly anxious and unprepared because it really came up fast this year, didn't it?