Do you love low-budget creature features? Movies like "She Gods of Shark Reef" and "Night of the Blood Beast" and "Attack of the Giant Leeches"?  If so, you have excellent taste in cinema - and you may have occasionally wondered whatever happened to B-movie god Roger Corman's lost "Fantastic Four" film.

Well, now you can find out. A highly anticipated documentary called "DOOMED: The Untold Story of Roger Corman's The Fantastic Four" will premiere at Comic-Con to "shed light on the mysterious circumstances surrounding the legendary cult classic." Shiver.

It will screen as part of the SDCC International Independent Film Festival, not as its own panel. That schedule hasn't been released yet but we do know that Executive Producer Mark Sikes and editor/director Marty Langford will be present to introduce the film. 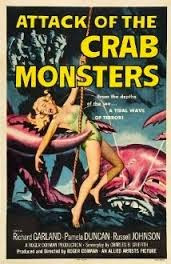 For people who only know Roger Corman from his recent Syfy movies like "Sharktopus" or "Dinocroc Vs. Supergator," this should be a fascinating look at both obscure Marvel lore and Roger's colorful Hollywood history. No, it probably won't tantalize as many people as the Back to the Future documentary - but for a certain segment of attendees, it's the movie equivalent of being handed a basket of kittens.