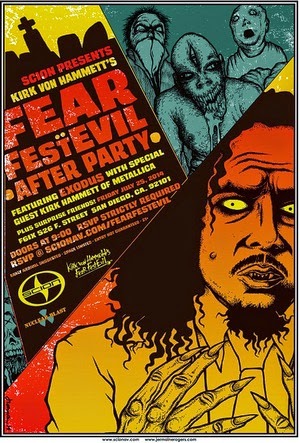 Finally! There's a major event that's happening on Friday night instead of Saturday. That would be the free Fear FestEvil After Party, featuring thrash metal band Exodus and (for a few songs) Metallica's Kirk Hammett. Apparently he was a member of Exodus before Metallica, for those of us who didn't know there was a before Metallica.

The party is sponsored by Hammett's toy company Kirk Von Hammett Toys and Scion Audio Visual - and to celebrate the occasion, Scion has provided more corporate poetry. "Through Scion AV, we are always looking for creative ways to merge the worlds of music and art that strike a chord with our customers. Partnering with Kirk Hammett and his toy company helps bring distinctive music and art forms to an enthusiastic audience, which is what Scion AV is all about."

Just in case you're not up to date on your metal band doings, Exodus was fronted by Rob Dukes who left the band and has been replaced by Steve "Zetro" Souza. The band will tour with Slayer and Suicidal Tendencies in November. As for Metallica, they recently caused a kerfuffle by headlining UK's Glastonbury festival; today they are playing in Rome.

The party is free and you can attend as long as you RSVP.