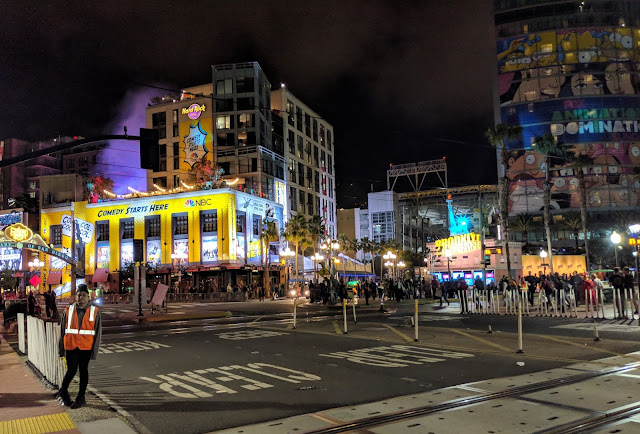 San Diego Comic-Con ended 2 weeks ago - and I'm just now posting a round-up of first-timer experiences. Is it me or did this year create a bigger SDCC hangover than usual? I'm just starting to emerge from the Comic-Con haze.

So. First-timers. I met quite a few of the little scamps this year, far more than I usually do. Some were euphoric. Some were underwhelmed. Most seemed to expect something different. For the ones I chatted with at the Con, I'd classify their dissatisfaction into 3 categories: 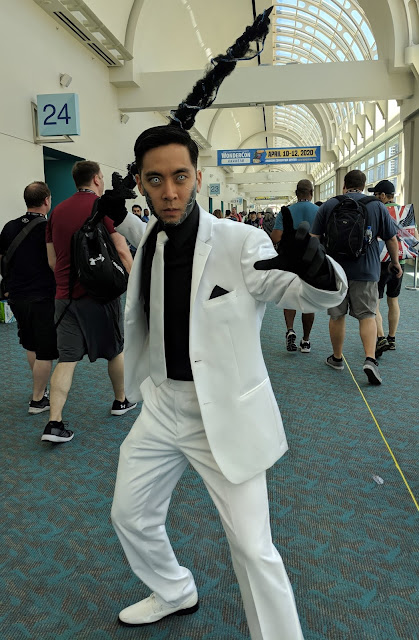 Onto the ones who actually filed reports with me.

Antonio
He and his friends came for Marvel and got what they wanted. What was impressive is that they did a trial run for Hall H on Thursday to perfect their strategy. Those are smart attendees.

While they were "awestruck" by the Marvel panel and decided it was "worth it, totally" in terms of the time they put in - he admitted that Friday in Indigo Ballroom was more consistently fun and that his Hall H vigils sapped his energy. Will he go back next year? "Of course. But we'll go out more. We missed all the parties."

Jennifer
Speaking of parties. Those and offsites are why she and her sister-in-law went to SDCC. They also do Mardi Gras and other events, and seemed to expect similar levels of debauchery at Comic-Con - but alas, found that SDCC nightlife is actually pretty average! "Things shut down sooner than we thought and we did a lot of walking around, looking for places to go. I don't think we realized the real parties are invitation only, people don't tell you that."

They went into the convention center to get their bags but didn't do any panels and thought the Exhibit Hall was too crowded to deal with. Will they go back next year? "If we do, we'll bring a bigger group. It's pretty expensive for what you get."

Crystal
Every year I talk to someone who got dragged to SDCC by their friends or partner. Crystal is that person this year and - perhaps because she had limited expectations - had a smashing time. A big reason: books.

"I am a BIG reader. I thought Comicon would be just about comic books but there were authors I knew there and great publishers, so I was very happy. We also saw the Preview Night pilots, which I really enjoyed, and got to meet my boyfriend's favorite comic writer. It was crowded and I don't do well in crowds but I did okay. I would have liked to go to the Her Universe fashion show but maybe we can do that next year. I really enjoyed myself, more than I expected, and I hope to bring more of our friends next year." 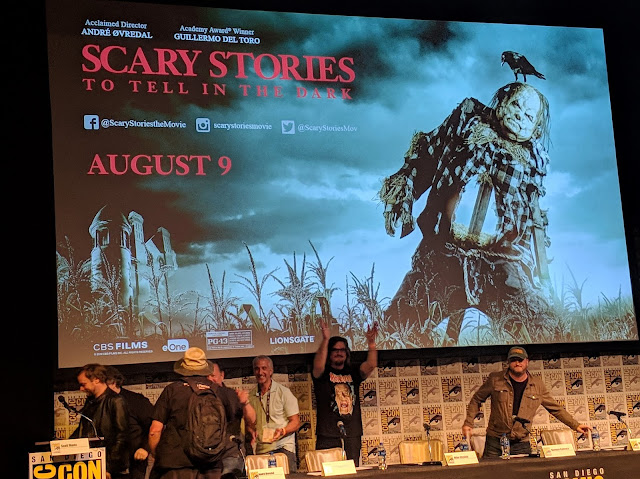 Michael
Michael is the kind of first-timer I never heard from a few years ago: completely prepared and educated on the convention center rooms, line strategies and other tips. One of his friends was on his 3rd Con and led them through what sounds like a fairly mapped-out plan to acquire signings, do Rick and Morty things, and go to Team Coco House to see Rory Scovel. But - and this happens to all of us at some point - hardly anything went their way.

"Comic-Con sucked at first. We got shut out of everything, guards yelled at us for sitting in the wrong place, someone who was supposed to trade tickets screwed us over, and we missed the Rick and Morty talk. We ended up drinking a lot and just kind of gave up and did whatever. After that, it got more fun. But it's too much hassle. You set yourself up for failure, essentially."


Kelsie and Friend
I met these girls on Thursday. They were intimidated by the crowds, by rules, and were shocked by how sprawling Comic-Con is. I know this isn't a thing, but they are the kind of attendees who could have benefited from a paid SDCC sherpa. My advice to them was to be more assertive (something that came to seem ironic as the Con wore on and people became increasingly aggressive) and steer their own Con, as opposed to letting it wash over them. By Sunday, they reported having gone to a few good panels, running into some of the It Chapter 2 cast, and meeting other attendees at Prohibition who wound up taking them around the Gaslamp. "I would say all in all, it was an adventure. We're ready for next year. We'll know what we need to do next time."


Ash
Ash is from LA. He reached out to me after reading my post on going to SDCC alone, which is what he did for Thursday and Friday before helping out at a friend's booth on Saturday and Sunday.

"Comic-Con was about what I expected. I worked in a comic shop where everyone used to talk about these parties where they met this famous person or that and I didn't see anything like that. Comic-Con seems very vanilla to me. But I went to panels and bought a lot and that felt like I was finally seeing the real Comic-Con. Working the table was tiring but the people were easygoing and no one got out of line like you reported. We'd just eat and pass out later, so I missed whatever happened Saturday night. On Monday, the whole city felt different and I felt like I did miss something but I don't know what. I think I wouldn't work there again. It stops you from having the full experience."

Roger
I met Roger Thursday night at the Banana Splits screening, then checked back in with him. His report: he liked the offsites and found that while the lines were long, the people waiting with him were "fun and friendly" and he thought the offsites and freebies were worth the wait.

What he didn't like: "nothing can prepare you for the tidal wave of people at every turn. Especially on the exhibition hall floor, you could barely move, inching along at points, and you did so while running a gauntlet of backpacks that continually hammered you as people moved and turned, oblivious to these large extensions off of their bodies." He suggested that exclusives and artist signings be moved off the floor to allow more booth browsing and lessen the logjam.

Will he go back? He's not sure. "I'd definitely bring an umbrella to block the sun while in lines. I'd also like to do some things, like attend panels, that I didn't have time for because there was simply too much to do and too little time." 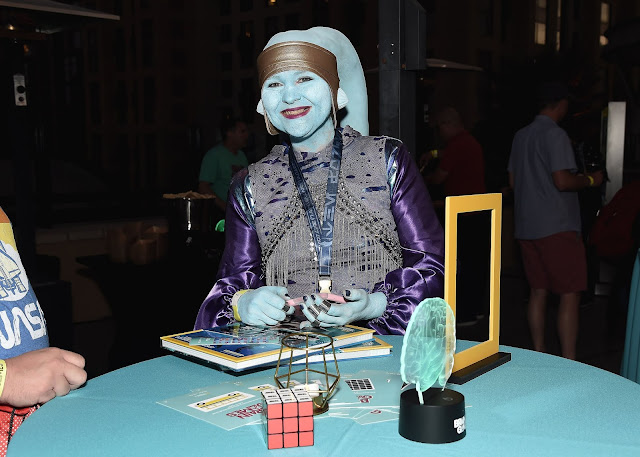 After reading through everyone's emails, I kept thinking about one of last year's first-timers who told me he wasn't going back this year. He actually did go back. What changed: he originally approached SDCC with the expectation that CCI and the vendors and offsites were all there to cater to attendees with some customer-centric experience that was all about winning our loyalty. That isn't how it goes, of course, inconveniences abound and no one really cares if you're impacted! He was offended by that, then came to accept it and went back this year with a different mindset.

I don't know if it worked for him or not. But it did make me realize that Comic-Con is an outlier in today's digital age where companies want to simplify and streamline their offerings for maximum appeal. At SDCC, no one's feverishly innovating to make you feel catered to. The Con is like a massive lumbering woolly mammoth who doesn't care if you get squashed under its paw or not - because 10 people will line up to take your place if you leave.

It's definitely not for everyone. And with so many specialized Cons multiplying across the landscape, I think the SDCC hegemony is dissolving as people realize they have choices beyond Massive Humid Pop Culture Convention and nothing at all.

Probably some of the first-timers I met are one and done, and that's just fine. But I would bet some of them were more captivated than they realize by the SDCC mystique and will be fighting alongside us in the Returning Registration badge sale a few months from now. 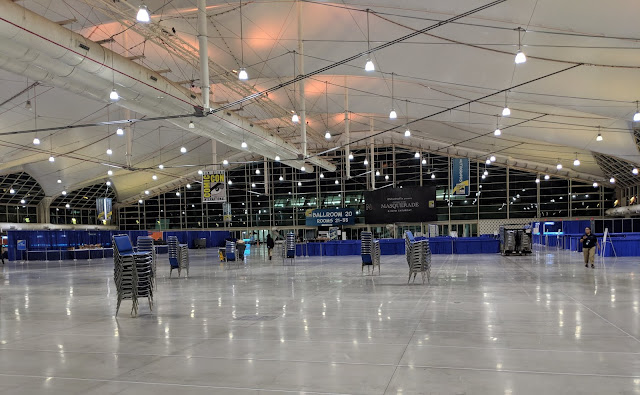