What do you think of Thursday panels? 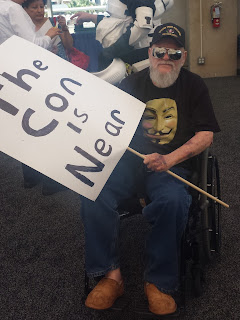 Today made it official: we got our first day of programming before ConanCon tickets went on sale. Did you think that would happen? Yeah, me neither.

Before we get into it, I want to say something to first-timers. One of mine (mine in the sense I bought her badge for her) has "only" a Thursday badge. She's no longer sure if she wants to go to SDCC (there's a lot of that this year) because well, it's just one day so why take the train from L.A. and bother with it all.

I know some of you are thinking the same. So let me explain a few things - one, starting out small on your first Comic-Con is a smart move. Doing the Exhibit Hall and a few panels on Thursday, going out Thursday night, then doing the offsites on Friday, is plenty of Con for anyone. You're going to get tired at SDCC, even if you're energetic. Also, skipping this year and waiting for next year is overconfident. You're only eligible for Returning Registration if you actually walk in the doors of Comic-Con. Otherwise you'll be relying only on Open Reg next year and likely winding up with another partial badge or none at all.

Okay, I'm done with my lecture. I just want to stress that yes, SDCC is worth it for one day or the Thursday/Sunday split. Now let's see what Thursday brings us - or at least a few highlights.

Ballroom 20 is a mixed bag. Pokemon, A Discovery of Witches, Bobcat Goldthwaite, Marvel, Charmed - I'm sure some attendees will stay for all of it, but most will stream in and out. Shouldn't be too hard to get into Ballroom 20 today.

Same for Hall H. Obviously you Predator fans will be there, same with Dragon Ball, and we also have Chris Hardwick hosting Doctor Who - kidding! just seeing if you were paying attention - and then Breaking Bad and Better Call Saul. Wait, what? This is Hall H, not room 6BCF. Well, as someone who slept outside to see an X Files panel years after it went off the air, I suppose I can't judge. All in all, this sounds like an accessible day in Hall H once you manic Whovians get your fix.

Indigo Ballroom is for lovers of paranormal TV and John Barrowman fans. Vampires, mermaids, zombies, soft sci fi, it's all there.

Oh and speaking of the X-Files: you can go to the library at 1pm for "an open conversation on the effects of the plot of the show in the 21st century, "The Scully Effect," and the fandom's self-sufficiency to create a preferable narrative." I.e., if you hated the Cigarette Smoking Man reveal, you can bitch about it/Chris Carter here.

And doubly speaking of shows we used to love, you can go to a Battlestar Galactica panel at 2 pm in room 5AB. You might also win an autographed 700+ page hardcover book about the show. There's also a Westworld panel at 4 pm but apparently it's more about legal this and that than the meaning of the season finale.

Room 6A has a weird but compelling mix of panels: TMNT, the anniversary of 2001: Space Odyssey, Crazy Ex-Girlfriend, Magnum PI and Kevin Smith.

Room 23ABC offers a range of comic book content: webcomics, comics journalism, being a comics editor, getting your youngsters started on the comic nerd path and more.

And so does 29AB, with panels on British comics, manga, comics and professional wrestling and more.

You can honor Michael Turner's legacy at 1 pm in room 9.

Do you rely heavily on Comic Buyer's Guide? You can celebrate it at 10:30 in room 4 and stick around to discuss YA comics and women in comics.

Mexican comics get the spotlight at 7:30 pm.

The Marriott Marquis always hosts cosplay and lifestyle panels and this year is no different. Cosplay 101, RPGs, managing your nerd finances, bringing up baby geeks - you could spend all day in here. Solitary attendees, know that these panels can be a better way to make friends than your typical TV pilot or comic creator discussion. If you want to expand your social network at SDCC, consider these.

The Horton Theatre has some comforting panels for you on friendship, mental health, body positivity, woman power and fairytales/speculative fiction.

You can discuss diversity in comics at 11 in room 9.

28DE has several options for rainbow nerds: you can hear about LGBTQ in pop culture at noon and then come back at 5 pm to talk about being black and queer in popular media.

Are you a feisty Resistance activist? Go to 32AB at 8 pm to meet other "politically engaged geeks."

If you were born under the scribbling star, you've got several writing workshops to attend. Some are brought to you by Comic-Con fixture Maxwell Alexander Drake. You can find out how to write action scenes in a novel at 10 in room 2, go to a Writing 101 workshop at 3 in room 11 or go to the Marriott at noon for a 2 hour writing session - followed by a writer's coffeehouse.

Letterers, inkers and colorists have their moment at 3 pm in room 9.

National Geographic's Mars panel kicks off my day at 11 in room 7AB.

Goths and fans of the English Romantics, please join me in the Mary Shelley panel at 4:30.  Oh, and it's preceded by a Ray Bradbury panel at 3:30, all happening in room 26AB. This is why I love Thursdays.

Curious how MIT geniuses are inspired by comics? Find out about their future breakthroughs at 2:00 in 28DE. Then stick around to hear about the time Snoopy went to his space and NASA played a role in it at 3:00.

Or you can hear from real women scientists - what will they think of next! - including from the Fleet Science Center at 1 in 25ABC.

Favorite title of the day: "Finding Comfort in the Apocalypse." Cory Doctorow, Elizabeth Hand and others want to discuss our imminent mass extinction at 1 pm in 32AB.

Art During The Holocaust will feature an actual camp survivor in room 4 at 1:30.  Real propaganda and art from the era will be shown.

The Science of Cool is at 5 pm in room 5AB, where various scientists wander over from the Tech Pavilion at the Omni (you should go to this, don't skip it) and talk about AI, robotics and more.


So what do you think? I like Thursdays precisely because they dish up science panels; I know some of you consider Thursday your offsite day, but I'm guessing most people will mix up their day, attending a panel or two but also staking their claim on whatever offsite line calls to them the strongest. (Assuming they find one.)

First-timers, one more plea for Thursday. You will get into these panels more easily than say on Saturday. Instead of spending 6 hours in line for 1 panel, you can cruise around the Exhibit Hall and catch your favorite panels and generally maximize your day. Which means I expect to see you Thursday.