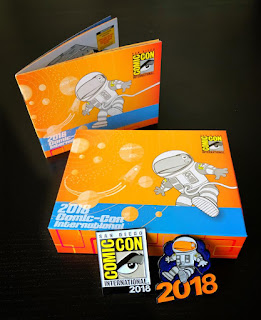 When you want a badge to San Diego Comic-Con, you naturally see yourself as a hunter. A badge is the skittish deer that may or may not come into your crosshairs during Open Registration. And if it doesn't, you may consider buying one from the many ads on Craiglist, StubHub, Offer Up and other sites.

Scalpers have always sold off SDCC badges, both real and fake, but this year it seems to be a cottage industry. So many ads for badges! Prices vary; and I have it on good authority that the sellers who can vouch for themselves and sell in person can command the highest $$$. I think there's a growing perception that you can buy your way into Comic-Con, as long as you have a reasonable social network and a healthy bank account.

In that scenario, it's still natural to feel like you're the hunter. Here's the thing, though, you're not. You're the deer and it's your head that could wind up mounted as a trophy in some scalper's metaphorical game room.

I'm not going to lie: I do know people who've bought badges to Comic-Con and did so successfully. I'm not going to pretend it never works. But I also know people who've been scammed and some of them have heartbreaking stories. (Like the couple that blew a small fortune on airfare/hotel only to arrive and be turned away or the high school kid who literally spent his entire savings on a badge that wasn't real.)

CCI has shared their usual warnings about international crime rings, VIP/guest/"my friend works in Hollywood" badges and fraudulent brokers who pretend to be a CCI affiliate. Don't fall for any of that. You will be taken for a ride. And no matter what scenario you stumble across, there are compelling reasons you're taking a risk.


I know some of you will send me haughty emails announcing your successful back alley/online badge transaction. Good for you. But I think people ought to know that there are risks involved - and that they can increase their odds of safely getting a badge for 2019 (50th anniversary!) by making friends in the online community and working with them in the badge sale.

And by that, I mean you can always email me about next year, read other blogs, join the Friends of Comic-Con forum and get yourself educated and connected. The summer of 2019 will be here before you know it - so don't blow your money on some half-assed badge fraud this year. It's not worth it.