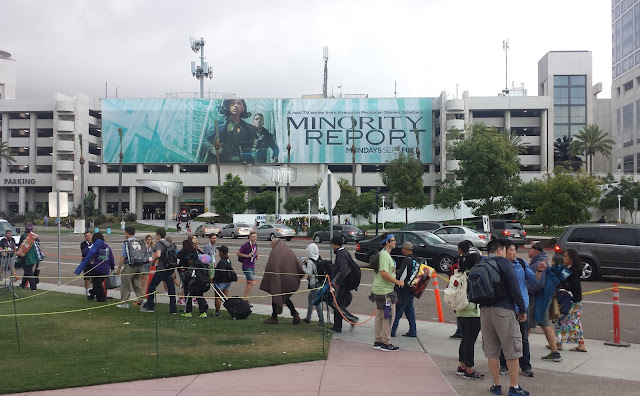 Since badges began shipping out, most attendees have anxiously watched their mailbox. In true SDCC fashion, this has not been a serene process. If you're nervous right now because your badge is not yet in your hands, fear not - you're in good company.

There's a whole spectrum of badge statuses right now, such as:

You received an email telling you your badge shipped out, but it's still en route. I have two friends on opposite coasts who both tracked their badges to a predicted Saturday arrival - but neither of them had it as of last night.

You received an email telling you your badge shipped out, but the tracker says it's still in a pre-shipment status. That's me and two other people I know. These emails went out on 19 June. Did they fall off a truck somewhere? Did a CCI staffer jump the gun in emailing us? No idea. I'm giving it a few more days before a polite email.

You received a badge and it has someone else's name on it.  It happens. Contact CCI.

You haven't gotten an email at all. If this is you, I'd email CCI this week just to check.

You received an email telling you your badge arrived at someone else's house, as planned, but now that person isn't answering your texts and emails.  I don't know anyone this has happened to this year - but if that's you, wait a few more days and then tell them you'll be contacting CCI to have your badge deactivated since they're acting shady. There's no excuse for radio silence when an SDCC badge is in play.

You received your badge, smugly posted a photo online, and now a scammer is using that photo in a fraudulent Ebay auction and CCI has banned you from Comic-Con. Okay - this is another category where I don't personally know anyone this year it's happened to, but it's happened in the past. If you have to brag on Instagram, cover your name with your dog's paw or something.

In the flurry of online badge chatter, you realized you never validated your shipping address and now your badge will not ship at all. I know one person who had missed the validation deadline due to password trouble; CCI worked with her to still mail out the badge. But that was weeks ago. At this point, you'll probably just have to pick up your badge at the Con.


People have been sharing their badge anxiety all week; I know the waiting is hard, but remember that somehow, some way, you will get your badge. Even if it gets lost or swiped, CCI can kill it from afar and provide you with a new one onsite. And no matter what happens along the way, I think we can all agree that this is way easier than the years we stood in line for hours/overnight just to pick up our badge.