The second round of hotel assignments 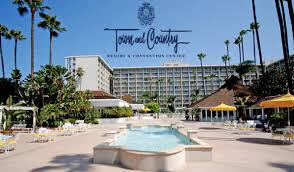 Tomorrow is Monday, 16 April, when the second round of hotel assignments go out. Last week's initial batch of emails was over and done with pretty quickly, so hopefully we won't languish all day refreshing our inboxes.

I've heard a number of misguided sentiments over the last week and wanted to remind people of a few things if they're new to the hotel sale. I can't guarantee how tomorrow will go, but I think it will be fairly predictable. In other words...

I think some of us will get downtown rooms but also a lot of Hotel Circle/Airport/Mission Valley rooms. Expect Town and Country, Humphrey's Half Moon Inn, La Quinta and other locales to show up in your inbox. The odds of finding out you got the Marriott Marquise or Hilton Bayfront are incredibly slim for tomorrow.

I'm not trying to be a downer, but I think it's better to set realistic expectations than be devastated for the second week in a row. Also - if someone offers you a room that's downtown but not quite what you dreamed of, I'd grab it. Every year there are people whining that they wanted the Hilton Bayfront and all they got was the Sofia. At this point in the game, I'd play it safe.

Over the last week I've heard that someone talked to OnPeak who told them only quads were assigned last week with downtown king bed rooms going out tomorrow; that multiple room requests were assigned first; that it was all random; that it was based on form submission timestamp; that plenty of downtown rooms are still left; etc. In other words, a whole lot of nonsense.

Don't get too caught up in all of that or the inevitable talk about someone's friend who got the Hard Rock despite getting into the form at 9:04. So far it looks like rooms were assigned mostly based on form entry time, with a few mysterious variables influencing that. This process will never be completely transparent and I just wouldn't work yourself into a state trying to figure it out or protest it.

You might still get a room assignment even if you took someone else's room.

Those of you who were lucky enough to get a downtown room transferred to you last week might be wondering if you'll still get your original assignment. I don't know if you will or won't, but I can tell you that I did last year.

In fact, this year's hotel sale has played out for me so far exactly like last year's - I got into the form very quickly but still didn't get a room in the first round, only to have a generous benefactor transfer me their room at the Hyatt. Last year, I did this and still got assigned the Wyndham Bayside in the second round, so having my name on a reservation didn't affect that one bit. We'll see if that holds true for tomorrow.

The waitlist is not a one and done deal.

A few years ago the waitlist had some amazing rooms available; they weren't quite as great when it opened up last year and some attendees grumbled about that. However, those who kept checking it over the coming months (and I know people who checked it twice a day) were sometimes able to pull down great downtown rooms. One guy emailed me that he wound up at 3 different hotels, but they were ace hotels. I know not everyone likes switching around during the Con, but remember that you shouldn't give up on the waitlist right away.

Good luck tomorrow. I know in many ways it will be even more nerve wracking than last week. Hopefully you get an email or an offer you can live with.