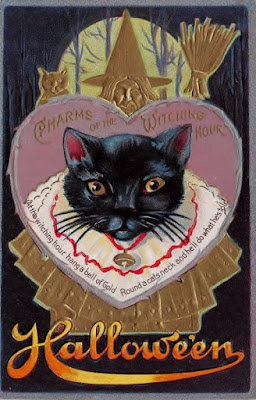 It's Halloween month! Maybe you're going to Hollywood Horror nights, maybe an Edgar Allen Poe seance, or maybe an occult-themed cosplay party. But you're also probably beginning to feel the trepidation that sets in when SDCC Returning Registration is nigh.

There hasn't been any formal announcement yet - and many attendees are not sure if Returning Reg will be in November, as it used to be, or if we'll have to wait until March again. My guess would be an earlier Ret Reg since presumably CCI isn't doing any major overhauls to the system this year. (But as with anything CCI - who knows.) In any case, it's time to think about that and a few other things.

Tickets go on sale on 11 October. I've noticed people who only attend SDCC or NYCC assume getting a badge to another Con is a sure thing; that isn't the case here as these tickets will go very quickly. Participate in the sale when it goes live if you want to go. If you've never considered going, think about it because this Con has a lot to offer. You can read my ramblings about it here.

It's right around the corner. If you've never been, I recommend watching the coverage to see if this Con appeals to you. It's slightly easier to get into than SDCC and it's something to consider for 2018 if you don't get a San Diego badge. While it's been a big and boisterous Comic Con for years now, it's recently picked up more and more of the Hollywood side of SDCC. People used to say, "I like New York Comic Con but it's not San Diego." These days, some still say that - but there are fewer and fewer of them.

It's time to gird your loins for a possible November badge sale. That means talking to (or creating) your buying group. A lot of attendees swore they weren't coming back to San Diego Comic-Con in 2018, or are only popping in for a day, so your group may need to be pruned, grown or shuffled around by priority.

If you were a 2017 first-timer - or just a lucky attendee - you may not have a buying group. You will find a variety of options here. You can join one of the huge groups out there in the community, you can pull together some friends for a smaller group, or just ask around to join up with strangers. The third option is actually pretty common in our world, which is why you will want to get that started now so you can build trust and get an idea of who you're dealing with. I'll post more details for people who are new to this in the next few weeks.


Go ahead and spook it up this October. But be ready for an SDCC badge sale as soon as a month from now - and start making Plans A, B and C for your 2018 Con life. As with all things Comic Con, fortune favors the prepared.