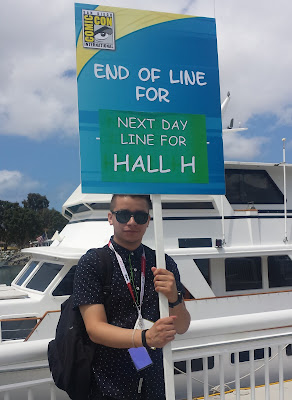 It's our last weekend before Comic-Con. By now you know the top exclusives on your list, who you want a signing from and which days will be your busiest. But you've also probably realized that many of your choices swing on whether you even can get into a certain panel or room.

Lines are - after getting badges and hotel rooms - the biggest grievances at San Diego Comic-Con. You'll hear people say that it's not even worth going anymore or that it's impossible to get into Hall H. The first is a matter of opinion, the second is flatly untrue. You can triumph over most line situations - it's just a matter of what you're willing to give up. You might want to sacrifice smaller game for one big kill, or opt to keep your time free.

Here are some of the questions I get on lines.


What kind of thing will I have to stand in line for?

Many things. It's not just Hall H; there could be a line to pick up pre-sale exclusives, to get an autograph, to enter a gaming tournament, to go to a screening at the Horton.

Why are the lines so long?

Because we're all barking mad. We've gotten to the final round of the journey that is trying to attend San Diego Comic-Con and nothing will stop us from obtaining our panel, toy or film of choice.

And there's the fact that SDCC doesn't clear rooms - so instead of waiting in a line to see the first panel of the room, you'll be waiting with people there to see a panel four hours from now.

Can someone hold my place?

To an extent. Definitely work with partners, but don't install one person to hold places for 10 people who show up at the last second. When this happens over and over, you can wind up with an extra 200-300 people ahead of you who didn't wait like you did. This has been a huge source of contention in recent years. Huge as in, causing bitter and longstanding feuds.

Does standing in line mean I'll definitely get access?

Not always, not in a guaranteed way, no. There have been situations when thousands of people spent the night in line for a panel they would never get into. It is very difficult to assess how many people in a line snaking around the back of the convention center will fit into a room. Most often you just have to guess.

And some lines - for drawings, say - are a crapshoot. If only 1 out of 3 people in that line will get the exclusive or autograph, you need to weigh the odds against what else you'll miss out on.


Hall H is a slightly different story. The wristbands provide some guarantee and have mitigated - though not eliminated - the unpredictability and disappointments of the Hall H line. The 4-day campouts, people cooking on tiny grills, that woman getting hit by a car and dying because she was so afraid of losing her spot, the fight where one attendee stabbed another in the eye with a pen  - it was anarchy for a few years. Things are more orderly now, but you'll still need to dedicate effort and time to getting a good wristband.

What time will I need to get in line?

Early. It's unusual to make back-to-back panels in different rooms unless they're fairly small. Accept the need to spend time in line and plan your day accordingly.

Some panels are walk-in. Yes, even Hall H. Do a drive-by if you can a few hours ahead of time; check Twitter and ask; play it safe if the panel is important. It's really easy to overestimate the line time (like when I spent 12 hours in line for an X-Files panel and sat next to someone who'd waited about 90 minutes) and underestimate it - the first NASA panel at SDCC had people lined up 3 hours in advance but a ton of attendees showed up within 30 minutes and were shocked to find they couldn't get in.

Also consider the context of other lines. Let's say Hall H is having a highly popular day Saturday and a not so in-demand day Thursday. Saturday will draw more people out of your Indigo Ballroom line - but on Thursday, your line could be more crowded and competitive.

If you're deciding when to get in line for some kind collector/exclusive invent involving Hasbro, Mattel or some other behemoth - do your research on the specific company you're targeting. As I said in my most recent exclusives post, almost every "regular" collector I know has come away from SDCC in the last 4-5 years angry and empty-handed because it's so difficult to triumph over what can feel like a rigged system. You'll do best to seek guidance from attendees experienced in that particular domain.


Offsites are best done early on in the Con because the lines grow throughout the weekend. But I did hear about some people getting lucky on Sunday, so apparently it just depends. As with many things at Con, early morning or early evening can be prime time for minor drawings and events.

Why do people get so frustrated with lines?

It's not just a matter of waiting. A lot of people actually like sleeping outside and waiting in long lines. It's a chance to rest and catch up with friends or make new ones. It also makes people feel hardcore and gives them bragging rights.

However, it doesn't always go smoothly. See the aforementioned dynamic where dozens or even hundreds of people join their friends in front of you at the last second, shoving you way back in line.

Exhibit Hall lines can get really ugly. Remember - rules and guidelines can change on a dime, the staff isn't always prepared for demand, and the whole melee is supervised by different types of staff and guards. So attendees can get conflicting directions for where to line up, be told they can't line up, told to line up but not given the right ticket to actually purchase something, be forced to disperse while a difference staff member lets new people in, etc. There's also the horror show of when a line is moved, and a bunch of attendees take advantage of the confusion by jumping in at the front.

There's no surefire trick here. Be polite with staff, even if they're belligerent, and plant seeds of doubt by telling them that a different staffer gave you permission to line up/buy/enter the drawing. Form solidarity with the people around you in line. But when all is said and done, there will possibly be times you get screwed and you can't do anything about it.


When is a line worth it?

This is highly individual. But you need to ask yourself if:

If you answer yes to most of those - I wouldn't spend more than a few hours in line. 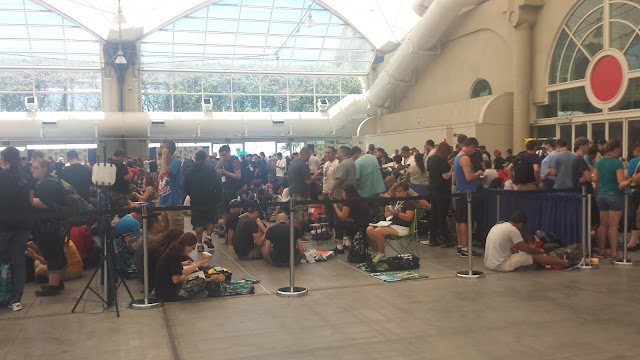 What are common mistakes with lines?

Randomly joining a line is always a mistake. Check which line you're in. It's easy to be told the wrong thing and spend 90 minutes in a line for something you don't care about.

If you can't find a line, don't accept "I don't know" from a staffer. This happens with autographs, smaller events, Horton panels and other events. Keep asking, keep waiting, ask online. (See my Horton panel advice.)

Other times people wait in line long after they lose any hope of getting in. Follow logic over what a volunteer tells you. I've told this story before about a Neil Gaiman panel where the room filled, the door closed, the panel started, but the volunteer kept telling us we were getting in. People dutifully waited long after it was clear we were not getting in. Take control of your destiny at SDCC; there's a lot of confusion flowing around and you'll need to dig for the truth sometimes.

While it's hard to tell precisely when a line will be admitted to a room, you should play it safe in terms of going to the bathroom or out for coffee. If you think there's any chance your line will start getting ushered into the room - and this can happen well before your panel or screening starts - do not leave the line. If you come back from the restroom and your friends are already in the room, you can't jump to the front of the line unless those people are willing to take you at your word that you were just in line.

Is it possible to do SDCC without lines?

Yes. Remember that the big room panels usually have their panels shown in the Playback Room. If you only want to see 1 panel and don't want to wait 4 hours to get into the room and then sit through another 3 panels, this is a good option. I know everyone wants to be within the physical presence of their favorite casts, but when there's 4,000 people between you in the room, it's not going to feel that physical anyhow.

Or you can just opt for multiple smaller panels instead of blowing your energy and time on that one Game of Thrones or Stranger Things Hall H panel. This is how I roll and for me it's a happier strategy. If one panel is dull, no big deal - I didn't invest an entire day in it. It also frees me up to eat or go back to my room or meet up with someone on the fly.


But I am going to do a long line campout. How can I make it more bearable?

Obviously you want to share line duty with a partner. If you don't know anyone, ask around - you'll find someone else intent on the same panel/line.

Bring whatever you need for the long haul - snacks, water, blankets, air hammock, chair, phone battery, ipod. Also do research into local 24-hour coffee shops, stores and restaurants (limited) so you can go on a run whenever you need to. Yes, some actors will come by and hand out donuts or pizza but it's nothing to bank on.

Talk to the people around you. This isn't like getting stuck on a plane listening to someone's stories about their knee surgery. You're with people who share your interests, it's a relief to exchange hotel or badge sale war stories, and you'll hear all kinds of great Con news and gossip. Your new pals will also save your spot while you hit the loo or go get breakfast. This really is one of everyone's favorite parts of the Con. Last year I chatted up two people in a Syfy line and this year I'm driving down to the Con with one of them.

If you lived through the 2017 badge and hotel tumult, then you know in your heart that this Comic-Con could be your last. The demand is just too dire these days to feel certain of being there next summer. Consider that when you're deciding how to spend your days and hours. You want to live your Comic-Con at maximum enjoyment - so think hard before you spend all of it in a line.
Posted by Valerie