Over the winter I discussed a controversy over Phoenix Comicon's suggestion that prospective volunteers pay for the privilege. While that idea was eventually tossed out - after a significant outcry - a new complaint has risen like a phoenix (sorry) from the ashes: on top of the badge fee, attendees are being asked to pay an additional fee to see the Con's top celebrity draw, Dick Van Dyke.

You may not think of Dick as a typical Con panelist; you may even have believed the Facebook death hoax a few years back. But he's 91, very much alive and apparently willing to tolerate the burning hellfire that is Phoenix in early summer to meet his fans. Which is great! The announcement stirred up a lot of excitement until everyone found out that because PHXCC is "anticipating record interest," they are treating the panel a bit differently.

To attend, people must either:
And you will need a Saturday PHXCC badge, naturally. 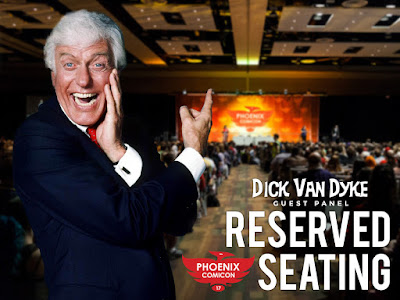 So why are attendees peeved? Partly it's lingering rancor over the volunteer issue (and the various assassination campaigns that went on) as well as things like significantly higher service fees while buying 2017 tickets. Certain workshops and panels now carry a fee - for instance, the Con has 15 writing workshops for $8 each, which can quickly add up. That can come as a shock to people who are used to their bigger Con badges (like SDCC) covering it all.

And then there's the question - why pay extra for Dick? I know he is a beloved celebrity popular with all ages; my parents' best friends in their late 60's love him and so does my ex-boyfriend who's 31. One of my relatives was proud to attend the rehab named after him. But Phoenix Comicon has had other great guests. Can we expect this as a new pattern going forward - buying a badge as a starter admission and then being asked to pay for more and more offerings on top of that?

Because that quickly makes a Con feel like a money grab and makes planning for it even more onerous. People want to buy their badge or ticket and call it a day. And then there's the question of getting what you pay for. When I saw Julie Newmar and Adam West at PHXCC a few years ago, they missed almost half the panel due to traffic. Everyone was understanding - but they may not have been if they'd paid extra to attend.


I'm sure Dick Van Dyke will walk on stage to a packed house. But there's more to offering a great Comic Con than filling seats. PHXCC has shown before that they are willing to listen to their attendees; hopefully they'll consider their feelings in creating the fee structure for future Cons.
Posted by Valerie