Let's talk about our SDCC 2017 resolutions 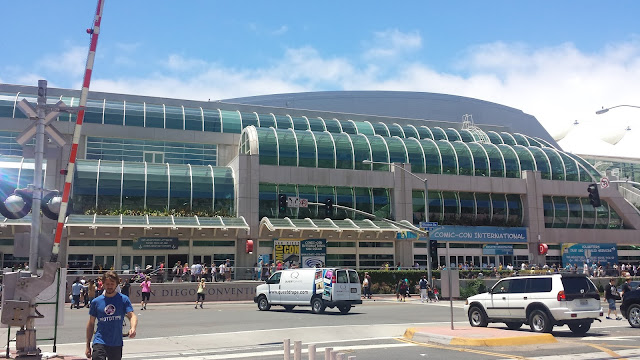 Happy New Year! What did you do today? I'm guessing your day looked something like this:

1) You crawled out of your hangover - whether induced by alcohol or the miasma of misery that was 2016.
2) You made a list of New Year's resolutions that will utterly transform your life in 2017.
3) You thought about writing down "Go to San Diego Comic-Con" and decided....
3a) Not to bother because you're brazenly confident OR you've never been and figure it's hopeless
3b) To write it down because you understand the careful effort and attention going to SDCC requires.

Hopefully you picked 3b! Everyone, this applies to you, whether you've hit 8 Comic-Cons a row, lost out in 5 badge sales in a row, or just wistfully dreamt of San Diego Comic-Con from afar. Registration - both Returning and Open - is right around the corner and it's time to get organized.

Sign up for a Member ID. Don't put this off; do it now. Today.

Talk to your friends and figure out who is serious about going. We all know those people who say they want to go and then back out when it comes to forking over money for hotel room deposits, plane tickets, etc. Don't bother with them, don't try to convince or badger them into going. SDCC is a demanding experience and you want your companions to be 200% on board.

Get educated. Read the SDCC blogs and forums and talk to experienced attendees about what it's really like to go to Comic-Con. Because it's a far cry from the glittery parties and accessible celebrities you see on the TV.

I recommend reading my advice on prepping for the first time as well as going to Comic-Con even if you're destitute.

So you've gamely tried for a badge these last few years and each time you get left on the curb. It's the worst feeling, isn't it? I can't promise you a surefire method to get a badge, but I can make a few suggestions:

Team up with a buying group. You don't have to join one of the mammoth ones, or have 36 SDCC best friends, but if you can join forces with at least a few people, you will significantly better your chances. See me if you can't find anyone.

Look into other Comic-Cons. SDCC is not be all and end all of Con life, even if the E! network acts like it is. Look into New York, WonderCon, Emerald City, Silicon Valley, Gen Con, Dragon Con, Salt Lake and others.

You've got it knocked, right? Well, maybe not. We all know how CCI likes to launch changes we never saw coming (while refusing to make changes we beg for) and there's always the crushing demand of those outsiders to compete with. Plus the sale process has changed a bit for WonderCon, so you might want to check that out just in case.

But you also might want to think about your Con strategy in general. Is 2017 the year, maybe, when you decide to swerve off course and try another big Con instead? Maybe you'll just swing by San Diego for 1 or 2 days instead of the whole enchilada? This isn't sacrilege; it's possibly opening up a new path.

Or maybe you want to have a different San Diego Comic-Con. Maybe you'll finally come out of the cosplayer closet in all your costumed glory. Maybe you'll submit a film for the IFF. Maybe you'll decide to shop your own comic around or spend more time with friends and less time networking. This isn't quite as urgent as actually getting a badge, but it does bear thinking about now as it could influence your choice of traveling companions and preparation.


All of which boils down to this: you want to go to San Diego Comic-Con or you wouldn't be reading this. And even though it might seem far away today, at the dawn of the year, it really isn't. First-timers, if you want 2017 to be your first SDCC, start preparing now. Luck does play a small role in your Comic-Con fate, but skill and tenacity play a much bigger role. If you get serious now about going this July, there's a good chance you'll make it happen.