Sunday panels are up 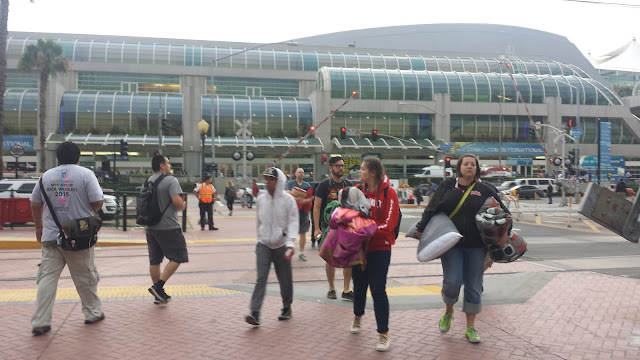 How will we spend our last day at Comic-Con? It's Kids' Day, which means we have a lot of panels for youngsters - but some of those will draw oldsters as well. Let's look at the Sunday programming.


Hall H: A short but mighty day in Hall H: Sherlock kicks off at 10, Supernatural follows at 11:15, and then Fox rolls out Prison Break and 24:Legacy.

So you can do Hall H and swoop in for all those sweet Sunday deals in the Exhibit Hall.  We also have...

"The Great Draw-Off" will have color commentary and sound effects, plus a lot of names you might recognize. 10 in 30CDE.

IDW thinks Kids Rule, which is why they're only letting kids ask the questions about their favorite comics. 10 in room 4.

The how-tos of drawing cartoons: creative kids can learn how at 11 in 30CDE.

Or they can just laugh a lot instead at a panel on hilarious children's books. 11 in 25ABC.

Free comics for all attendees in "Monster Battle Time" at 11. You tell the artists what monster to draw and they obey.

Steampunk crafts for kids: they'll get a hat or bracelet/keychain project. 30CDE at 1.

Kids draw their own superheroes at 3 in room 2.

DC Super Hero Girls: Hero of the Year premieres at 10 in 6BCF.

Firefly fans are gathering at 1 in the Marriott.

Your Comic-Con friend John Barrowman will be in 6BCF at 2.

Are you ready for the next Starship Smackdown? 2:15 in 6A.

The always popular Buffy Musical: Once More with Feeling is back and it's in 6BCF in 3:15.

"Camp out with Lumberjanes" will discuss both the original series and the new Gotham Academy crossover. 10 in 25ABC.

"Emily The Strange" returns at the same time in 32AB.

Fabio Moon and Gabriel Ba muse on how they're changing the world with comics. 11 in 28DE.

Do you want a LEGO Green Arrow minifigure? Or to find out more about LEGO dimensions?
Go to 6DE at 11:15.

At the same time: a Spider-Man panel on Dead No More: The Clone Conspiracy in 5AB.

Avatar: The Last Airbender is at noon in 24ABC.

Skybound has another panel at noon in 7AB.

"The Complete Wimmen's Comics" features a number of cartoonists and discusses the comic series that covered the taboo side of womanhood. The interesting side. Noon in 28AB.

It's not often you get Derf Backderf, Kate Beaton and Chester Brown all in one room. This will be a discussion on "researching and writing comics inspired by history" which means you can ask Backderf about being high school friends with Jeffrey Dahmer.

Are you reading Marvel's comics about Disney "theme park storytelling?" Room 8 at 1:30.

Comixology hosts another AMA at 2 in 29AB.

If you're a pin collector, you might want to go to "Disney Pin Trading & Collecting" at 3 in the Marriott.

The Christian Comic Arts Society is meeting at 10 in 28DE.

Pay tribute to Jack Kirby and hear about his influence at 10 in 5AB.

How are writers creating worlds beyond Western cultures? Find out at noon in 28DE.

"Bisexuality and Beyond" is at 3in 28DE.

Practice your pitch before Comic Creators Connection at 10 in the Santa Rosa room at the Marriott.

If you want to "create" your own novel, television series or film franchise - this is for the ambitious - room 8 at 10:30 holds all the answers.

"Are you fan enough to make comics?" Challenge extended. This panel on illustrating comics is in 24ABC at 11.

Another panel on pitching, but this one also covers interviewing and "how to make an opportunity when there isn't one." Room 2 at 11:30.

And we also get another panel on VR storytelling in 23ABC at 1:30.

Do you write children's books? Lit agents tell all at 2 in 24ABC.

Are you doing full-time creative work on a part-time schedule? Anyone who attends this panel on managing the struggling artist's life gets a one-year subscription to Adobe Creative Cloud.

Another panel on careers in gaming. Room 29AB at 4.

SDCC sits down for its annual performance review. CCI Board of Directors President John Rogers wants to hear your most candid thoughts and honest opinions about this year's event. That includes the hotel sale, registration, parking, the new RFID badges, all of it. Don't hold back! CCI welcomes your tough love. 3:30 in 23ABC.

So.... a typical Sunday in terms of topics, but still kind of light? Yes, Sunday has always been light. But this year it feels a tad lighter than usual. A fun day for kids but the only panel I'd hit is the bisexual one and I'll probably be on the road by 3.

First-timers, I wasn't kidding about Sunday deals - vendors do not want to ship a lot of stuff home, so they'll be offering some great sales. If you don't see one, haggle deftly but politely. This is something to keep in mind on Weds and Thursday when you're in that first flush of Veruca Salt "I want it now" thirst for everything you see. Plenty of it will be marked down by Sunday - and of course, some of it will be gone, too. Use your best judgement.

So Comic-Con panels have been announced. How do you feel, now that the bones of your agenda are falling into place? Still glad you have a badge? Shifting priorities?