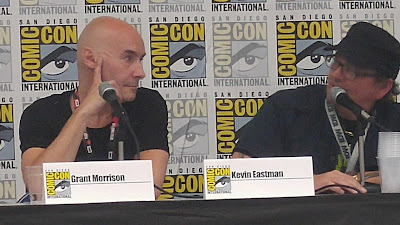 For those of you who don't know, Grant Morrison is now the editor of Heavy Metal. (You can check out the 2 issues he's helmed at booth 1529, along with back issues.) During the panel, Morrison, Kevin Eastman and others talked about the possibility of another Heavy metal movie (yes, it's possible but it didn't seem much on their minds), the future of the magazine ("more sex and intensified science fiction") and what they look for during the submission process: "the buzz of novelty." 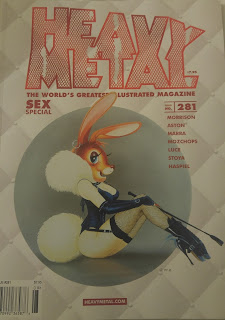 Afterward I talked to Morrison and he shared some advice for emerging writers and artists.

On balancing your own direction with the dictates of the marketplace:

"It's hard not to be dictated to because the world is going that way and there's always middle-aged people telling young people what to do. But the one thing I tell everybody is this: be honest with your own life because no one else has ever lived your life. No one else has ever seen through your eyes. You might have seen something everyone else missed. So it's really important to use your experience - if your parents die, write about it."

On skill in storytelling:

"I'm not an advocate of diary comics. You have to turn your experience into myth, symbol, something everyone else can relate to. Because everyone's had those same feelings. If you can say it in a way that reaches out to people and makes them feel less alone, or makes it more understandable and do it in a way that is genuine and truthful, you will be original. You can't fail. Always be true to yourself and don't do what you're told to do."

On partnering creativity with pragmatism:

So there you have it, wisdom from one of the most original writers working today. And do check out Heavy Metal - based on some of the work we saw last night, future issues will take you on a very colorful journey.
Posted by Valerie