Friday programming is up 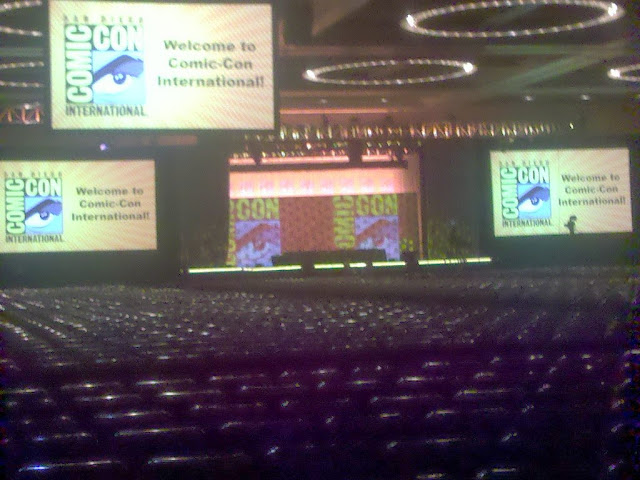 Friday panels are up! For many attendees, this will arguably be the best day of the Con. From the animation panels of Indigo Ballroom to the biggest shows today in Hall H, this is the day when people will stand in line for hours to get into one room, and then handcuff themselves to their chair.

But that's the downside to such a good day - there are so many temptations that you'll need to forego some to do others. Let's explore.

Teenage Mutant Ninja Turtles are in 6A at 11:45, giving you a sneak peak of Season 4.

Dead of Summer somehow has a panel at 2:15 in 6A, probably because it has some serious names behind it.

If you missed People of Earth's pilot on Preview Night, you can see it at 2:00 in 6BCF. Powerless follows at 2:30.

Can't get into that screening? Go to Bold Voice of Contemporary Horror, also at 6, in 7A.

Nickelodeon's Women in Animation panel is in room 24ABC at 6:30.

Talk about the movies and shows you love and hate in the Rotten Tomatoes panel at 6:45 in 6DE.

Grant Morrison talks more about Indian Superheroes at 11 in 32AB.

Image talks about the new worlds they've created in 23ABC, also at 11.

The creative teams behind DC's villains talk Suicide Squad and Harley Quinn at 11:15 in 6DE.

Or celebrate 20 years of Resident Evil in 6BCF.

3 words that definitely belong together: "Shatner Singularity Universe." 12:45 in 6BCF.

What's the latest in the world of Star Wars Collectibles? 1:00 in 7AB.

Authors Ben Hatke and Patrick Rothfuss discuss writing and creativity at 11 in room 4.

Lovers of exploratory art will attend Dave McKean's "Black Dog: The Dreams of Paul Nash New Graphic Novel" in 7AB at 2. Then you can discuss Dark Horse literature at 3 in the same room.

"Teen Superheroes: Hormones and Super Powers" is in 25ABC at 2.

It's The Tick's 30th anniversary. Celebrate with surprise panelists at 2:30 at the Horton.

DC Rebirth focuses on the Justice League at 3 in 6DE.

Horror and thriller authors talk about your "deepest and darkest fears" in 29AB at 3.

Did you know the CDC and others made a motion comic focused on HIV and STI prevention? See the first episode and find out more about the series in 32AB at 4.

Explore your dreams of owning your own comic shop in 28DE at 4.

At 5, you can get a look at the upcoming Mouse Guard Coloring Book and get a live reading of a Mouse Guard story from comedian Hal Lublin.

Want to cosplay with your kids? Return to the Marriott at 2.

Then you can stop being frivolous and go to "Cosplay: Let's Get Serious" at 4.

What if you want to take your cosplay skills to the big time? "From Cosplayer to Hollywood Creative" is at 5 in Marriott.

If you're doing Comic Creator Connection, come to listen to the "All Stars" at 10 am for tips on making it a success.

Are you a master of the short comic form? Talk to other masters at "Short Form Comics" at 10 in 28DE.

Storytelling and VR and AR: it's here and you can learn all about it at 11 in 29AB.

And also at 11, Publishers Weekly helps you with "Turning Your Ideas into Graphic Novels."  In 28DE.

How revolutionary: "Guerilla Tactics for Sharing Your Art with the World." 12:30 in room 2.

Are you a woman interested in a "nontraditional" role in the entertainment industry? Report to the Marriott at 1 and find out how others are doing it.

Most unintentionally hilarious panel description: in "Draw Pretty Girls" you will find out how to make female characters "cool and sexy without objectifying them." 1:30 in room 2.

If you can't make it into that one, "How to Draw Convincing Hand and Facial Expressions" is at 2 in 30DCE.

Or you could just go to "Hollywood Location Scouts" at 2 and give up the whole art thing. Real scouts will tell you what's involved and answer your questions. 23ABC.

Another panel on "Breaking Into Comics." 3 pm in 30CDE.

Spark your creativity at 3 in the Marriott. This mentions "more female-driven content" but then says all ages and genders welcome. So feel free to show up, everyone.

The "artistry behind video game design" - find out about at 3 in 32AB.

Or you can find out how to draw with Adam Hughs at 3 in room 2.

Are you an indie creator? You may want to attend "Acquiring Distribution through Diamond Comics" at 3:30.

Both artists and writers are invited to perfect their pitch before attending the Comic Creator Connection at 5 in the Santa Rose room at Marriott.

"Queer Representation in All Ages and Youth Media" brings you comic stars discussing the LGBTQAI+ world for youngsters.

The Black Panel is back: room 5AB at 10 with possible surprise guests.

Are you trying to launch a nerd-based or pop culture startup? You'll have your very own Shark Tank to pitch your idea and get coaching. 32AB at 1.

What's happening in China? Superfans everywhere, apparently. Find out about this "lifestyle" in room 9 at 2.

Transgender representation in pop culture: find out about it in 28DE at 2.

The tie between horror and LGBTQ: explore it at 7 in 28DE.

Are you curious about real Trek tech? Report to room 5AB at 6:30 to learn about "Science, the Smithsonian and Star Trek." Not only will you get a glimpse of the restored Enterprise, you'll see clips of the upcoming 2 hour special "Building Star Trek."

"Science and Comics" will discuss AI, robots and rockets at 8 in 25ABC.

If you partied yourself out Thursday night, you will definitely want to stay around the Con tonight for more laidback - but still exciting - events.


At 7, you can see the 17th Annual Animation Show of Shows.

Howl's Moving Castle will be shown at the Horton at 7.

Sharknado fans will want to visit with the cast at 7:15 in 6A.

The Star Wars trivia panel is at 8 in 7AB.

The Eisners are at 8 in the Indigo Ballroom.

The Hollywood Science Fiction Museum will present photos and news at 8:30 in 24ABC.

The Christian Comic Arts Society Mixer is at 8:30 in 26AB.

But Heavy Metal: The Movie is on at the same time in room 28DE.

So is the Floyd Norman documentary - in room 9.

Or you could choose "zany fun" with Super Geeked Up Live at 9 in 29AB.

Hall H and Ballroom 20 playback kicks off at 9 at the Marriott.

So yes, Friday will be a formative psychological experience - panels that maybe change your life, panels you miss that haunt you forever, movies and swag and insights and games that make you so grateful you got a badge this year.

If you're like many attendees, you've probably got some decisions to make. You can't do it all. Remember the line factor and the sheer travel distance between panels; unless you can teleport, you probably can't make a 3:00 panel in the Indigo after leaving room 3 at 2:52. Do your best to decide on your priorities and narrow down your choices from there.