Busy day. What did we find out? Besides the obvious, Thursday panels.

And the SDCC keycards.

Well, you probably found out if you were going to the Wednesday Conan taping with Silicon Valley. There were questions, celebrations and complaints about this, so a few points.

We also found out there's a new kind of villain in town; scammers who steal badge pictures and post them in fake online auctions. I know a few thousand of you happily shared your badge photo, sometimes with your name showing, online, so please learn from what happened to one guy: he was stripped of his pro status and had his badge cancelled by CCI - because a picture of it showed up in an Ebay action. Hopefully he can work this out with CCI. In the meantime, consider this living proof that fraudulent badge sales abound online. Whoever posted that auction (and they immediately created a new one with the name scribbled out) does not have a badge, but they may soon have an extra 2K in their pocket.


Titan announced their Torchwood book would launch at the Con.

Boom! showed their WWE covers, including one featuring Matias Bergara.

In addition to the Aliens reunion at the Con, Fox is letting you pre-order a special 30th anniversary version - and the Blu-ray comes with a Dark Horse art book and collectible cards.

Another Thursday night event: the Archer cast will do a live episode reading on a yacht. If you got tickets to this, I'm officially jealous. If you didn't get tickets, you can still get tickets for Rave of Thrones the same night.

So did Toys R Us. 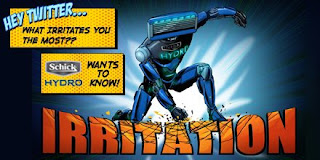 
ComiXology announced its Comic Book All Star trading cards which you can pick up at their booth.

Or you could pick up this Jared Leto-based Joker.

If I learned one thing today from the reaction to the Thursday programming, it's this: attendees are feverish for Mr. Robot. That was the panel I heard mentioned above all others. We'll see if people are just as excited for Syfy panels The Magicians and The Expanse; I'm guessing not quite as much.

Tomorrow we'll have Friday programming. We already know the afternoon is difficult, with iZombie, Orphan Black and Archer forcing you to make hard choices. And that's after giving up Hall H and seeing Game of Thrones at Conan. So many sacrifices!
Posted by Valerie