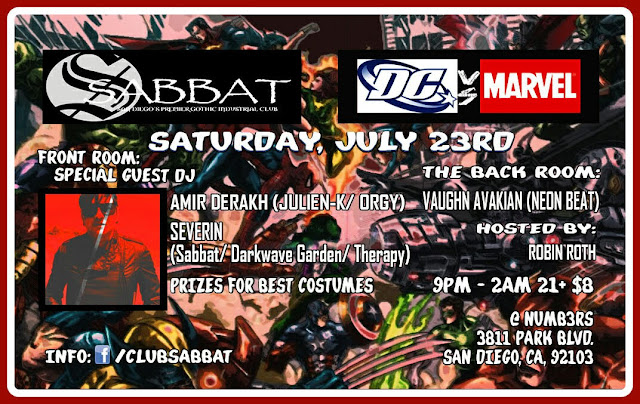 Let's end June on a dark and mysterious note. Club Sabbat - which takes place at gay bar Numbers - is throwing a party just for you, lovers of goth, fetish and industrial scenes. So by all means break out your cosplay but also your sexiest corset dresses and armbinders. The theme is DC vs. Marvel, which means you could frame any number of scenarios: Catwoman and her whip corrupting Nightcrawler, Huntress menacing Black Widow with her crossbow, Talia ah Ghul anything; the possibilities are endless.

Numbers may be a gay club, but Sabbat is popular with straight, bi, homo and pan people, aces and revelers of every other stripe. So don't feel like you're crashing the cool rainbow kids' scene if you're hopelessly hetero - it's your party too. Especially if you want the kind of industrial & alternative music you probably won't find in the Gaslamp.

When: 23 July, Saturday
Posted by Valerie