The Walking Dead photo op has been announced 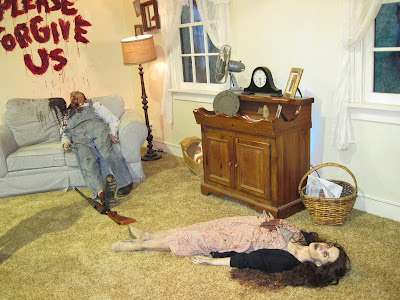 
Perfect photo op is perfect. First-timers, you may have seen online the amazing Walking Dead photo ops that are a major draw on the floor each year; the very first one is above. (You could lay down and pose with a gruesome expression next to the corpse. There were all of 2 people in line ahead of me.) You WILL want to get your picture taken in Negan's lineup, if only to make all your TWD fan friends at home seethe with jealousy. Booth #4237; make a note.

And the AMC panels are right where you thought they'd be. Fear the Walking Dead is at noon in Hall H on Friday - and it will have an installation "in the form of a yacht" behind the convention center at the pier. The Walking Dead will follow at 1 in Hall H with autographs at 3:30; Preacher will be a few hours later also in Hall H at 6:30. I have to say Preacher strikes me as more of a Ballroom 20 show but it's AMC so I get it.

Will the panel drop any hints about Negan's victim? Doubt it, but at least one cast member (and probably a few others) know who got the bat. And remember, if you're devastated that there's no Walking Dead Escape this year, you can swing by Universal Hollywood and do the new Walking Dead attraction. Although those have to be some Hall H-level lines.