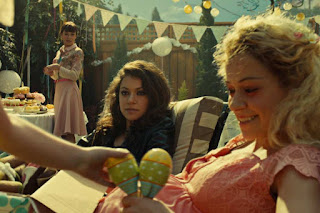 Orphan Black wants you to join them in a Final Season Farewell at Comic-Con. The cast will be at BBC booth 4129 on Friday. They're also having a 4:30 panel on the same day in 6BCF - which means you'll have a tough time doing this panel and iZombie/getting in line for The Killing Joke.

BBC is also showing off Dirk Gently's Holistic Detective Agency on Saturday at 4 in 6BCF. But will they reveal anything about The Living and The Dead, their spooky ghost story coming to America this fall? We don't know yet. 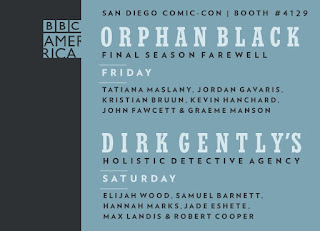 It's your big break, Sharknado fans: an audition to be on a Syfy Sharknado game show at Comic-Con. Yes, this is real even though the page looks weird. You will need to submit a photo and video, and have a valid SDCC badge. You don't need to be beautiful, but you do need to be "fun and outgoing" - i.e., be entertaining to watch on TV.

Let's talk exclusives. Entertainment Earth is giving us a really great-looking C-3PO. In the category of more unusual exclusives: Purridge the kitty doing his business in a litterbox. Mattel wants you to race these Death Star Hot Wheels on a racetrack far, far away. And there are only 100 of Archer's Enormous Package - so if you're coveting this box of Archer goods, maybe it's best to order now.

The 501st Legion is having an SDCC party Friday night, 22 July, at Maz's Place. This is a ticketed sit-down dinner with dessert and bar so you can't just roll in on a whim.

You can get a sneak peek at Luke Cage (and star Mike Colter) at the Con.

Nickelodeon wants you to relive your 90s childhood with a booth extravaganza that will feature:
Shows mentioned include Rugrats, Double Dare, Real Monsters, Catdog, Rocko's Modern Life, Invader Zim and "others." Fingers crossed that "others" will mean Are You Afraid of the Dark? and Action League Now!


Today's Toucan post about the updated Marriott facility might seem like a snoozer, but it can actually help you understand where to go. First-timers, Comic-Con in general is bigger than you expect it to be - and while attending a tournament or event at a hotel sounds like it would just involve walking into the lobby and following a sign, it can be more complicated than that.

Your nerdiest dog is probably dying for you to take him to PAWmicon so he can explore his cosplay passion.

Will CCI's friendship with Lionsgate help bring Hulu's Dimension 404 to SDCC? I hope so. This sci-fi anthology "aims to evoke that 3 a.m. feeling of wandering onto the weird side of the web, stumbling upon stories that cannot be explained in the world we know. Each episode will explore a different bizarre mystery, including an obscure cartoon that may hold the secret to time travel or energy drinks perhaps causing a global apocalypse." And Constance Wu is in it.

If you've been pining away for either Tom Hiddleston or Skull Island, you're in the luck: both will be gracing Hall H. Does anyone else remember when Skull Island was announced at Comic-Con a few years back and 2017 sounded so far away? And now the release date is less than a year out.

Oh and if you're headed for Orlando this summer, here's a sneak peek at the Skull Island attraction. 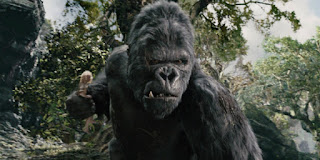