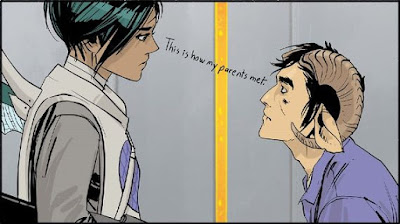 What a day. Let's prioritize.

We also heard about Con-X, your newest outdoor billowing Con carnival courtesy of Entertainment Weekly. Even if you make it a policy to avoid staggering around in the sunlight from festival to festival, you may want to swing by this one at night as it promises concerts and nightly entertainment. Free; for badge holders only.

Kevin Smith and Marc Bernadin are hosting Fatman on Batman Thursday night of the Con. Tickets are on sale now.

Last night Penny Dreadful was staked in the heart, shocking fans who like seeing pretty Victorian goths every Sunday night. So no Season 4 in Cairo with a mummy and no SDCC panel this summer. #Heartbreaking.

Hey IDW, are you bringing the first issues of this Star Trek anthology to Comic-Con? Because you really should. I don't know what this "September" release date is you're talking about.

One thing that is definitely coming to SDCC: this Saga set of Alana and Marko who are just begging to be released from the box so they can fight these Catwoman and Harley Quinn biker Barbies.

Though all 4 would be trounced by the brawniest ever Clark Kent from Kotobukiya, (but probably not by Entertainment Earth's Ant-Man and Giant Man set.)

Finally, CCI started rolling out their Comic-Con tips. While you will read similar tips about 83162 more times over the coming weeks, their list today is solid so you may as well start your shopping list now. What I will add; bringing cash isn't just about avoiding ATM lines but being able to get the exclusive you want. Some booths won't take plastic and that item could sell out by the time you run to the lobby and back. It's happened to me. Also, bring a small drugstore to alleviate headaches, hangovers, throbbing feet, the effects of too much restaurant food, potential offspring, etc.

With just a month to go, the momentum is definitely rolling. Oh, and we'll be finding out a lot more about Syfy Presents this week - so stay tuned.
Posted by Valerie