10 weeks till San Diego Comic-Con: are you ready? 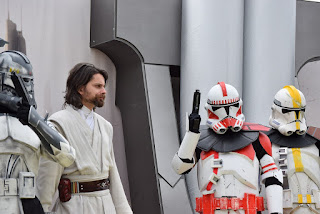 10 weeks from tomorrow, I'll be driving through the California dawn in my favorite ritual of the year: heading to San Diego Comic-Con. Hopefully you'll be doing the same.

That means we're entering that point in spring where we're right on the precipice of SDCC madness. Pretty soon more announcements will start happening and some of us will start signing up for things like gaming tournaments and Portfolio Review and Comic Creator Connection; in July the actual programming will be announced and we'll all go a bit berzerk making our plans and vacillating between excitement and nervousness.

First-timers, as I've said before, you may be viewing SDCC as a massive spectacle that will engulf you upon entry into the convention center, with no action on your part required. You're wrong. You do need to do a certain amount of strategy and preparation going into the experience, or you'll come out of it feeling like you missed something essential.

Here's what you can start doing now.


Get your costume locked down - and your cosplay figure.

If you're still dithering over what to wear, now is the time to decide. You'll need to pull your costume together, test it, work out a plan with your cosplay group or partner if you have one, and generally ensure that a malfunction won't leave you stranded mid-Con. And if you have a special pair of Harley Quinn hotpants that you need to shed 20 pounds to get into, or a shirtless ensemble that requires decent abs, you can't put that off any longer either. 10 weeks! Either kick up your work outs now or find something else to strut around in.

I said this a few months ago; how many of you did it? Exactly. I'm not one to lecture in this department, being a spender of lavish proportions, but this year I did create a special SDCC fund and its existence is really liberating. Instead of feeling guilty every time you whip out a credit card on the floor, pay for things with the cash you've squirreled away. Eat excellent meals at good restaurants. Buy frivolous Star Trek makeup. Get a massage at your hotel spa. Your Comic-Con happiness will go up a level.

I went over this a few posts ago, but sometimes you'll want to plan your own event instead of waiting to see if someone else will. Maybe it's a special fandom happy hour or breakfast, maybe you'll want to arrange a meetup or cosplay photo shoot; maybe you'll just want to meet a group of online friends in real life. You don't have to plan anything super-luxe. People really just enjoy getting together.

Do this if only for the free Wifi; but don't discount the possibility of future benefits from your points. It can happen. And some hotels really will go the extra mile for you if you demonstrate your loyalty. (One time I emailed a certain hotel to say I really appreciated their attentive staff; I was being completely genuine with no ulterior motive, but it did lead to an offer to help me book a room during the following SDCC. You just never know.)

If you're new, I can't recommend this enough. It's impossible to grasp the scale of Comic-Con programming until you scroll through it right in front of you. Come to terms with the magnitude of your options now. I've spoken to first-timers who assume they'll do a couple of panels, work the Exhibit Hall and then go off and see San Diego, then come back and do a night event. No. Once you see the enormity of the options before you, you'll probably want to gorge yourself on more screenings, panels, games, signings and parties than is physically possible.


Sell off your stuff.

I said this before too. And I doubt you did it, because selling things on Ebay, Craigslist, Offer Up and other sites is a pain. But it really is a good thing to do, because 1) it'll fatten your Paypal account or wallet 2) it clears out some display or cupboard space 3) it prompts you to go through your back issues and toys and think of items to hunt down at the Con. Again, don't bring this stuff into the Exhibit Hall and expect vendors to give you top dollar. That doesn't happen.

Not calling you a sloth; maybe you're already in fantastic shape. If you're not, that's okay too as long as you have the energy and stamina to do Comic-Con without collapsing. You'll walk a lot. Sometimes you'll trudge, which is even more tiring than walking. You'll sit on floors and stand in lines and walk block after block while trying to find that Indian restaurant that you were told was "not far at all." Your feet will hurt and maybe blister. But you can handle all of this gracefully if you get in decent shape now.

Do you actually know for sure who's coming to the Con? I feel like these days we all have friends in farflung places, so start announcing your plans on social and see who else is going. Make plans to hang out. Don't decide to just text each other at the Con, because odds are you'll both be too busy to make it happen. One manageable way to make plans is to pick two options (say, Wednesday before Preview Night or Thursday evening) and have everyone keep both clear until the programming is announced, then pick the best one. Breakfast is a good way to make time for each other; I like meeting up with people either around 8 pm, before going out, or around 11 pm on quieter nights when everyone's done with their premiere, dinner, etc. The point is to plan something solid, because otherwise it probably won't happen.

A few years ago I wrote a ginormous opus on marketing yourself at SDCC, and it still holds true for the most part. And it applies to more and more attendees, as so many people now come to Comic-Con deliberately to network, showcase their talent and pick up career advice. If you haven't already, order new business cards, publish a new site, get your samples in order and so on. Don't just wing it; if you're in the right field, SDCC can be an advantageous place, so position yourself to pounce. Otherwise your nerves might turn you into that attendee who can't stop babbling about their half-baked project, and no one likes those people.


10 weeks, everyone. And for some of us that involves a Memorial Day camping trip, a college graduation, a wedding, a Fourth of July family reunion. This is a busy time of year. So lay the right groundwork now and be ready to roll when July comes around. It's already coming up fast.