Marvel dominated the news of the day, but we found out a few other things.

Warner Bros. is releasing Justice League: Gods and Monsters on VOD  on 8 July - Preview Night. Fingers crossed this is a free screening for SDCC attendees.

Marvel officially won't be in Hall H - well, according to Deadline. I do give this more credence than James Gunn's Facebook chat but I still think we'll have other Marvel panels. First-timers, here's what you should know: Hall H holds 6,500 people. It has the biggest, splashiest Hollywood panels, inspires the longest campouts, and is indeed considered where much of the Comic-Con magic happens. But its panels are only open to 6,500 people out of 130,000 so the absence of one panel is not going to impact most attendees. There will still be plenty of Marvel toys and panels for fans to soak up.

Ghostbusters fans will like these: a slimed Dr. Venkman from Funko and a Stay Puft bottle opener and slimed logo pizza cutter from Diamond Select. You can see more Funko toys here. 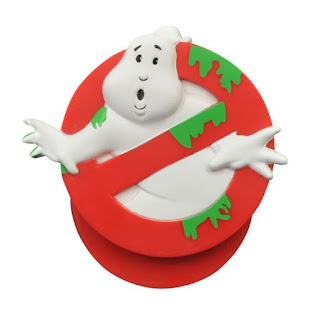 Entertainment Earth is bringing this Penny Dreadful exclusive: Victor Frankenstein's journal. I was kind of hoping for a stamp of Vanessa's scorpion sigil but I'll take it.

Halo fans will get a limited edition Mega Bloks collector set at the Con - and at first glance, it looks pretty spiffy.

Yes, please: Mike Allred has co-created a new Vertigo series, which will be announced at SDCC.

Film geeks may or may not care about this: Quentin Tarantino shot his latest project, The Hateful Eight, in high-res, wide image 70mm format - Ultra Panavision 70 format, which supposedly was last used in 1966. Now he's installing film projects and anamorphic lenses in 50 theatres so we can see the movie as it's meant to be seen, and people who've seen film footage report being dazzled. (According to Hollywood Reporter, Star Wars anthology film Rogue One will also be shot in Ultra Panavision.) What does this mean for SDCC? That any Tarantino panel will 1) be packed and 2) possibly involve some interesting extra measures.

Oh and finally - don't forget that CCI's Toucan blog will be counting down to SDCC with daily tips.  Today's was what to bring. By and large, it was a decent list although I was baffled by the suggestion to bring boxes, packing tape, labels and other shipping material. That's ... cumbersome. To keep it simple, just hit up a Fed Ex or UPS in the convention center or surrounding hotels and they'll supply all that for you at very minimal cost. It's really not very expensive. For instance, I shipped a huge box of books to myself from ECCC for $25 and several boxes of books and action figures home from SDCC for $45. Completely worth it.