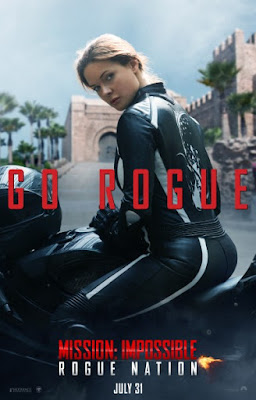 So who snagged a ticket to Funko Fun Days today? It sold out fast, despite a hike in the ticket price. Luckily we have other things to look forward to.

And we can buy tickets for Chris Hardwick's live Nerdist podcasts on Friday. The actual shows take place Friday, 10 July and Saturday, 11 July.  First-timers, this is traditionally a very popular event at the Con so don't drag your feet on buying tickets if you think you might want to go.

Mission Impossible released a bunch of posters featuring the slogan GO ROGUE. Unfortunately it's not an X-Men crossover; the plot is instead this - Ethan and team take on their most impossible mission yet, eradicating the Syndicate - an International rogue organization as highly skilled as they are, committed to destroying the IMF.

Cast members are still being added to Fear The Walking Dead, which makes me wonder how much footage we'll get at the Con.

The Disney machine seems to be working overtime this week, announcing an animated 2017 series based on Tangled and an upcoming live action movie based on the "Night on Bald Mountain" part of Fantasia. Now we have a teaser for "The Good Dinosaur." Scientific accuracy aside, this movie is picking up a lot of buzz and will pull major crowds if it's at Comic-Con.


Nerdist laser tag will be back at the Con - but "totally different."

The Yu-Gi-Oh! movie will have its own panel, featuring Kazuki Takahashi who will also do a rare autograph signing.

In the category of Star Wars toys that really need to be at Comic-Con: life-sized R2-D2 refrigerators that deliver your drinks to you. Maybe they can use them at panels to carry microphones to attendees.


Is anyone else preoccupied with SDCC 2016? We get so many long-range announcements these days that it's hard not to anticipate future Con panels. I'm already thinking about Suicide Squad, Neuromancer, Aquaman, Skull Island, the Sex Criminals and The Wicked & Divine TV shows, etc.  And now we have news that Leonard Nimoy's son is doing a documentary about his career. The future looks tantalizing - here's hoping we all score in Pre-registration this autumn.
Posted by Valerie