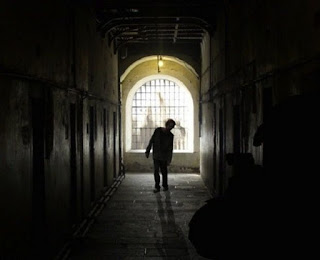 We got a nicely creepy Fear The Walking Dead poster.

The Loneliest Stoplight, starring the voice of Patton Oswald, will air at SDCC on Friday, 4 pm.

Top panel alert: William Shatner will appear in character as Captain Kirk in Ballroom 20, reading excerpts from "The Autobiography of James T Kirk." Thursday, 10:45 am. To pick up an advance copy, visit the Titan booth. You'll read all about his farm childhood to his adventures on the Enterprise.
Also appearing: Lex Luthor, also known as Jessie Eisenberg, who confirmed he'll be at Comic-Con for the Batman v Superman panel.

The Mary Sue weighed in on the selfie stick ban.

Let's talk about Thursday in Ballroom 20. Halle Berry and Jeffrey Dean Morgan will lead the Extant panel; Scorpion will give out a special Scorpion comic book; Zoo will give a special sneak peek of footage.

Agents of SHIELD and Agent Carter will share a panel on Friday at 3 pm in Ballroom 20.

The full Limitless pilot will air at SDCC, followed by a Q&A.

Paramount is skipping Hall H, just like Marvel; Sony is scaling back, other than Pride and Prejudice and Zombies.

And finally, the Sci-Fi Museum panel will be on Friday at 7 pm in 23ABC, and will have stars from Futurama, Star Trek and more.