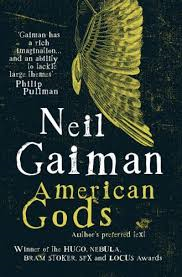 We got to see this Blacklist #1 variant.

We found out the Archer panel will include a Best Of reel - but that isn't satisfying the fans clamoring for a screening of the season 7 premiere. Which this article guesstimates will be 7 January or 14 January 2016.

We learned a slew of facts about The Martian so we can all feel smarter when we watch the panel. Such as: this movie has the NASA seal of approval and in fact emulates the actual Mars missions NASA is planning. There's also a serious potato farm involved, which won't surprise anyone who read the book.

We also got some very pretty concept art for American Gods. This seems to be getting crowned as GOT's successor before it's even hatched out of its shell, but even if that status is premature, it's probably true.

Funko's 5th Wave brings us Twisty from AHS, C-3PO, Lil Gruesome, Helena from Orphan Black, a Clone Trooper and Jaws eating his feisty victim Quint. It would be timely to see Jurassic World figures;  Funko says their goal "was to cover as many beloved licenses and characters as possible to reminder every Comic-Con attendee why they fell in love with these stories in the first place."

If you were hoping to see a Westworld panel at SDCC, never mind; Collider says its 2015 release date has been delayed.

There are multiple events to fill your Comic-Con nights - but if by some chance, you wind up staying in and looking for something to do, considering a Superfight game with one of their new decks, including a Walking Dead deck.

On the CCI side, we found out that quite a few events and resources that used to be in the Marriott have now moved over to the Hyatt. And that the Fulfillment Room is now called Programming Premiums. That sounds very cable TV-ish; I don't know why they can't just call it something less elegant but more accurate like The Swag Room.

We also found out that attendees can reserve their own spaces at the Hyatt, called Fan Meeting Rooms. This means you can celebrate the most obscure fandom that lives in your heart and finally meet the other 4 people who share your passion. I thought attendees would be more excited about this but the reaction was rather sluggish.

Also, Blood Drive sign-ups are live. First-timers, if you're not completely squeamish about donating, really consider this. It takes only an hour out of your day (if that) and you can help a great cause while acquiring a generous swag bag of shirts and books and becoming eligible for a variety of good prizes. You can sign up online right now or on site.

And finally we found out about a new 3-day music festival called BAMF that seems to offer almost anything you can think of. If you're looking for off-site activities that are more of a party atmosphere instead of a structured event, this is probably something you should explore.

Just a week now until the official programming starts to drop.