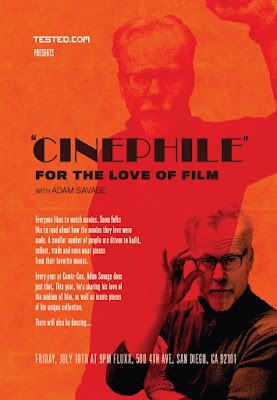 Another Friday night party! Tested.com is bringing you "Cinephile" - For the Love of Film with Adam Savage.

I know the image text is hard to read so allow me to translate:

"Everyone likes to watch movies. Some folks like to read about how the movies they love are made. A smaller number of people are driven to build, collect, trade and even wear pieces from their favorite movies. Every year at Comic-Con, Adam Savage does just that. This year, he's sharing his love of the medium of film, as well as iconic pieces of his unique collection. There will also be dancing..."

So that sounds like a great event for film buffs and cinephiles. (And the mystery of the title is solved.) One thing that's appealing about this - it's something you can't get at home. Adam Savage probably isn't going to show up at your local bar to show off his film artifact collection. Don't get me wrong, premieres and screenings are great, but you know you can see those movies eventually. This is something that's special for SDCC attendees. And it's free, even though drinks, food and "some fun surprises" are included.

What: Cinephile - For the Love of Film with Adam Savage