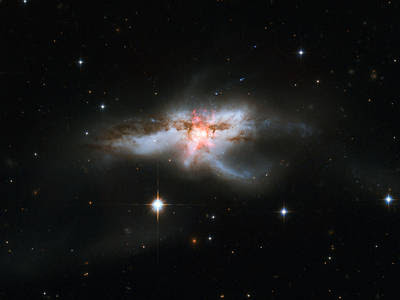 
If you're like me, you stood in your backyard when you were little (or last night) and looked into the stars and yearned to travel the universe. We're nerds; we're the passionate explorers of the mind and the cosmos, and much of our love of science fiction, weird TV shows and metaphysical mysteries stems from that essential hunger to experience the unknown.

Which makes us all incredibly lucky to live in an age of fascinating scientific achievement. And for those of us going to San Diego Comic-Con next week, we're even luckier in that the Con is going to serve up some enthralling science panels, courtesy of NASA. Some content will relate to The Martian, the new stranded-on-Mars film coming in October; other content will discuss Mars and Europa voyages, new tech, and the link between science fiction and real scientific initiatives.

And I got especially lucky in getting Bert Ulrich of NASA to answer a few questions on what we can expect at Comic-Con and from a future of space exploration.


Let me start with this. NASA has had an increasing role at SDCC, which attendees love. People stood in line for hours for NASA's panel last year - to a certain nerd sector, you guys are rock stars. We also know you're not at the Con to sell us something. So why has NASA been showing up at SDCC, South by Southwest and other Cons? A desire to bring science to life for the average person? Obviously there's a trend of people without advanced scientific degrees being keenly interested in learning about space exploration, AI, nanotechnology, etc.

The tech and computer age is exciting for NASA.  NASA has attained its own “nerdoriety” so to speak, so our place in today’s tech culture is really fitting. Our social media numbers are soaring (over 10 million followers on Twitter alone) and we participate on average in over 100 space, science and technology documentaries a year. The public is smarter, savvier and simply more curious.
Motion picture studios also have developed an interest in space exploration as well - not only with films like Gravity, Interstellar and The Martian (which all have NASA themes) but also Avengers, Men in Black 3, Tomorrowland and Transformers: Dark of the Moon. We're thrilled to have some serious real estate in pop culture these days.

NASA has a panel this year about turning science fiction into science fact. The description has an exciting sentence: "Throughout its history, NASA has been inspired by science fiction and conversely has influenced it." Which science fiction does NASA consider the most inspiring? And which "fantasy" technologies and capabilities will people see become reality in the next 50 years? (Oh, and thanks for having a "special greeting from the International Space Station and a heartfelt tribute to Leonard Nimoy.”)

Science fiction has inspired NASA big time. A considerable number of astronauts, scientists and engineers happily admit that certain TV shows and films in their youth like 2001, Star Wars, Star Trek, etc. led them to pursue careers in space exploration.In fact, you often hear that Nichelle Nichols was a role model for astronauts and employees in general - so much in fact, that she helped NASA recruit astronauts at the beginning of the shuttle program.
And of course, then there's the phenomenon known as Mr. Spock. Leonard’s Nimoy’s recent passing was not only a tragic loss for his family but also for the world.  Adam Nimoy, Leonard’s son, will talk about how his father was inspired by space exploration, as well as his new documentary “For the Love of Spock.”
The synergy between science fiction and NASA is exciting, constantly evolving and inspirational.
Another panel is Building the Holodeck. Jason Cruzan, director, Advanced Exploration Systems Division at NASA will be on hand to discuss "how recent developments like the Oculus Rift headsets enable the holodecks of today;" the panel also promises to "show some of the exciting virtual experiences under development." Can you give us any further detail? What can you tell us about the next big leap in virtual - how far away are we from seamlessly immersive VR? Will virtual be the closest to thing to space exploration that most currently living people will experience?

I think the fantasy technologies fuel interest and spark excitement and curiosity and vice versa.  I know Jason Crusan who is a leader in advanced technologies for NASA is planning to discuss some of the new exciting projects he is working on.
Another panel has NASA talking about our upcoming voyages to Mars, including in the context of The Martian. What can you tell us about these voyages? Will we get any information on ideas for a Europa voyage?  What about NExXS <Nexus for Exoplanet System Science> - will there be any mention of that or the hunt for exoplanets and alien life?
We have planetary scientists on two panels who will talk about subjects ranging from Europa to Mars to exoplanets and the search for new worlds.
NASA’s Jim Green and NASA JPL’s Kevin Hand will discuss NASA’s journey to other planets, including the upcoming Pluto fly-by on July 14th by the Pluto New Horizons spacecraft. NASA astrophysicist Amber Straughn will talk about subjects ranging from exoplanets to the James Webb Telescope.
A lot of the discussion will also be framed around the incredible collaboration we are embarking right now with Ridley Scott. His film adaption of Andy Weir’s The Martian is chock full of NASA and we've been very heartily and heavily involved in the production from the beginning. So on our Mars panel, we have Andy Weir, the author, Aditya Sood, the executive producer, and NASA scientist Jim Green who consulted on the film and who will show special visuals related to Mark Watney’s adventure on Mars. (Watney is the main character of the film played by Matt Damon.) And Victor Glover who became an astronaut this year and who may some day be on a mission to Mars will discuss his own path from test pilot to astronaut to future explorer.
It's 2030. What voyages and breakthroughs will NASA be talking about at Comic-Con?
Similarly to Ridley Scott’s film, NASA is embarking on its own journey to Mars, developing the capabilities needed to send humans to an asteroid by 2025 and Mars in the 2030s. Todd May - the manager of NASA’s Space Launch System Program - will talk about “NASA’s new great ship” to send humans farther than ever before on a rocket of science fiction proportions. It’s such a thrilling time to be at NASA!
Thank you, Bert, for being so generous with your time!
So there it is: if you're a space nerd, NASA is going to electrify your Comic-Con. A Spock tribute. The Martian. Special rockets. Mars and Europa voyages. Fly-bys! It's all happening in our lifetime and it's just going to get more incredible.
See you at the NASA panels - and maybe at Asteroid Comic-Con 10 years from now.
Posted by Valerie