Going to SDCC as an indie comics creator 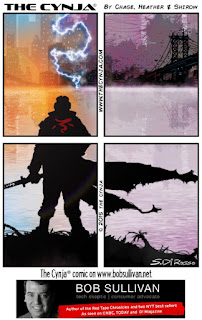 People outside the comic book world think of Marvel and DC when they think of comic conventions – if they think of them at all. Yet anyone who goes to San Diego Comic-Con or any other convention knows that indie creators and small press publishers are some of the most exciting aspects of the Con. This is where you can find work that’s often more fresh and creative than anything filling the shelves of your comic shop on Wednesdays. And because Comic-Con is a natural meeting ground for comic fans and the creators who are trying to get their work noticed, it’s a dream of many indies to just get in the door – something that’s gotten harder and harder each year.


Someone who did just that for SDCC 2015 is Chase Cunningham, co-creator of a comics universe called The Cynja. Inspired by his two daughters, Cunningham collaborated with partner Heather C. Dahl and illustrator Shirow Di Rosso on the series. As techies and parents, the three formed the perfect creative team to develop The Cynja – a character who helps kids understand online dangers as they navigate apps and virtual environments in their digital lives. From the book:
Hidden deep inside our planet’s virtual world, lurking in the darkened cyber alleys of our digital neighborhoods, a new generation of bad guys has risen. Zombies, worms, botnets – all threaten our happiness and future. But there is hope. A lone warrior battles this new sinister cyber evil. He is the Cynsei.  The Cynsei is trying to keep us safe. But the guardian of all things noble in cyberspace cannot fight alone. His enemies are too numerous. If the Internet is to escape falling into darkness, the Cynsei needs help. But who would be brave enough to travel into the depths of malicious networks?  A Cynja, that’s who.

After releasing their first graphic novel last year, the team now publishes The Cynja as a weekly web comic in English and Dutch, along with activity books, blog, subscription newsletter and children's workshops. The series has been so successful that it’s been recognized by PBS NewsHour, the Guardian, Children's Book Review, HelpNet Security, PC Magazine, the National Press Foundation and the former inspector general for the NSA. That's some serious prestige.

Recently they were selected by a panel of judges to be a featured small press publisher at Comic-Con. I talked to Chase today about how The Cynja came about and what it’s like to be facing San Diego Comic-Con for the first time.


What can you tell me about The Cynja? What motivated it?


The real idea behind the Cynja came from my partner Heather and I looking at the industry and seeing an absolute lack of material for kids to get interested in cyberspace.  We started talking about doing something cool for kids to get them interested in cyber security and shortly thereafter the character of The Cynja was born. We’re motivated by trying to educate the next generation about the benefits of cyberspace while also providing real knowledge about the science and math that really make the magic of the Internet work.
When we use the Internet, each of us enters a virtual world where forces of immense magnitude battle for power. Like ancient myths and tales of fantasy and science fiction, this cyber darkness is filled with a new generation of monsters—zombies, worms, botnets and more – but these monsters are real.

How are you participating at SDCC this year? Have you been to SDCC before?


This is our first year at SDCC.  We entered a contest for small publishers that had thousands of entries and we were lucky enough to be selected.  We are truly blessed and extremely excited to be coming to a venue like Comic-Con.


What challenges did you have in 1) creating the comic book and ) getting to SDCC?
Probably the hardest thing was figuring out how to go about publishing the comic and not going broke doing it. It is not cheap to self-publish. But it’s worth it after it all settles out.


How are you marketing your book?
We have active campaigns going through sites like Twitter, FaceBook, and other social media channels. But we also have our own Circle of Cynjas who are members of our forum who are basically all about the Cynja. We talk with them regularly and they help us spread the message about being cyber smart and cyber safe.

What advice do you have for indie comic creators?

If you have an idea and a dream, then don’t hinder yourself by thinking, “It might not go anywhere” or “Who will want to read this?”  If you like it and you think it is a cool concept, odds are someone else will as well. The only other thing I can say is to just fight for your cause, whatever that may be, and watch like-minded people flock to you.


To me, writing a book or comic is one of the best ways we can really leave our mark on the future. That tome will be around long after we are gone and it can speak to someone across the span of time if we do it right.


You can find out more about The Cynja on Twitter at @TheCynja - and of course you can visit them in the Small Press section at Comic-Con.