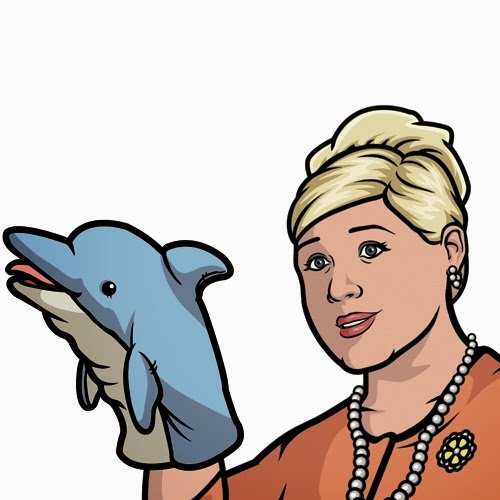 Factory Entertainment has rolled out a lot of exclusives this season, several based on our favorite FX animated spy show Archer. Now they're offering another Archer exclusive - a pink dolphin based on the infamous puppet Pam uses for HR purposes. But this exclusive means more than another Comic-Con toy; fans who buy it will help support breast cancer research and education.
We have Factory Entertainment CEO Jordan Schwartz to thank for this, who saw an opportunity in Comic-Con attendees' generosity: “While we donate products to support the blood drive every year, we thought that there was also an opportunity for individual exhibitors, even small companies like ours, to use the platform and power of Comic-Con to do something charitable.”
Schwartz's mother died of breast cancer at age 46, making this project a meaningful one for him and no doubt countless other attendees who've survived or helped someone battle the disease. (And of course Archer fans will remember when their favorite spy had Stage 2 breast cancer a few seasons back.) Profits from the pink dolphin puppet will be shared with Susan G. Komen For The Cure and Pink Ribbon Story Foundation. They'll be on sale at Factory Entertainment’s booth (#2747) - but if you're not coming to SDCC and want to help the fundraiser, you can participate online.
One more quote from Jordan Schwartz.“I hope that not only Archer fans, but also the members of the Comic-Con community in general, will seize the opportunity to pick up a limited edition collectible that both reminds them of their time in San Diego and contributes to the fight against breast cancer. Nothing would make me happier than to have the Archer cast and creators look out from their panel on Friday and be greeted by a sea of pink." Aw.