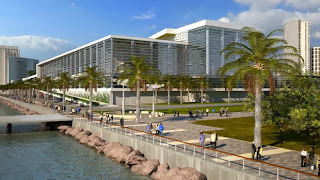 Were you under the impression that the planned expansion for San Diego's convention center, the one that's going to accommodate more of our teeming horde and let the Con stay in San Diego, was a done deal? Me too. Well, mostly.

But we were wrong. Today the $520 million project was rejected by the California Coastal Commission. Or rather, a rejection was recommended and it will come up for a final vote on 10 October.


The current expansion plan: add 740,000 square feet to the 2.6-million-square-foot center and pay for it with a hotel room surcharge; the expansion would add more exhibition and ballroom space, a 5-acre rooftop park and a 500-room expansion of the Hilton Bayfront.

The reasons it got rejected: it could block views of the bay and take up precious waterfront space, violating the "Coastal Act." On a separate note, an attorney is suing the city over the hotel tax plan.

Alternatives suggested by the Commission: build a foot bridge straight from the center to the Gaslamp (estimated to cost $20-53 million) and trim some of the expansion to maintain the bay view.

New competing proposal: The San Diego Chargers are suddenly a player in this game, with a proposal for a $1.2 billion combined football stadium and convention facility east of Petco Park that they say would avoid the above coastal access concerns. The San Diego Padres are also annoyed with the expansion plan.

Will it all be worked out? Probably, after a long slog of bickering, bureaucracy and court dates. But as to whether the expansion will be sufficient to accommodate a palpable increase in attendees, I doubt it. The rooftop park sounds cool and the foot bridge would be convenient, but there just doesn't seem to exist enough physical space to extend the convention center in any significant way without blocking someone's view of the water.

In other words, don't look for a final verdict any time soon.

Update: Bleeding Cool noted that CCI has renewed their trademark for Los Angeles Comic-Con. To be fair, they did so two weeks before the recommendation to reject the SD expansion, but it still shows they're prepared for an alternative future.

The trademark begs the question - if you change the name of San Diego Comic-Con, how damaged is the brand? Will people still be as zealous to attend LA Comic-Con? Will San Diego Comic Fest fill the void and move into the convention center? I really don't know.