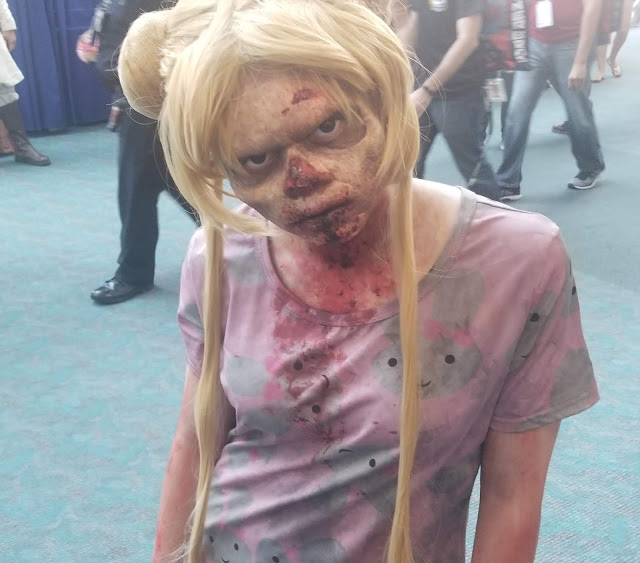 San Diego Comic-Con ended 2 weeks ago yesterday and I'm still getting first-timer reports. Why the delay? Maybe they were especially tired, these tender newcomers to our world. Most of the reports have been positive, mixed in with a few complaints - which is to be expected.

Here's what's different from last year: fewer political complaints. Either people heard fewer Trump jokes or they didn't mind the ones they heard. People also had fewer complaints about there not being enough to do (presumably because they had no other year to compare it to.) What surprised me - just as many line complaints as ever. Again, this may be due to not having any standard for comparison.

Like many of you, Chris wanted to hit SDCC for exclusives. Imagine his disappointment, then, at finally getting three single day badges and not getting a single exclusive. He was even more frustrated when he found out other attendees had been picked for multiple exclusives or autographs - and then went to an even higher level of annoyance when he saw people flipping them.

"I don't know what it was like before but at Baltimore CC I've usually been able to get what I want so this was a rude awakening. I had a list of stuff to get for friends and I didn't get any of it. I felt like a loser, going home without hardly anything. Assuming the same thing happens next year, I'm not going back, although I will go to a different Comic Con."

Sean is all about the parties. And so he was ready for SDCC to light up his nightlife - but it didn't! He says:"We went to six parties, that includes Ready Player One and the open attendee party and some bar parties, and they were all lame. Did not see a single famous person. Did not meet a single person who was someone. We did hang out with some guys from <redacted> Saturday night and that got crazy."

Sean was the only first-timer I've heard from in years who wasn't expecting the lines. "We left the lines for 3 offsites because it was too hot to wait. The Adult Swim state park was... pointless. I wouldn't do outside stuff next year, you waste your time and for what."

What he didn't do was the Con programming per se, such as panels. Those are on his agenda for next year. "I wasn't prepared this year, we took it kind of as it comes, but next year I'll have a plan. We'd spend all day trying to do something and wind up doing nothing. I wish someone had told us how much walking there was. There's no way to understand that till you get there."

Sean had only Thursday and Sunday badges but wants to try for a full badge for 2019.

I met Marisol and her teenage daughter last year; they told me they were dying to go to SDCC but had washed out in Open Reg three years in a row. This year they wound up getting jobs helping a local vendor in the Exhibit Hall for three days each, with a one day badge for the other day. This created a skewed experience where they were inside Comic-Con without the freedom to explore - but what they did see sparked their determination to go back next year as full attendees.

Mari's perceptions: "There was too much to do all at the same time. I found so many panels and speakers to go to but could only fit three in for my free day. I also got lost several times in the center. The staffers were not a help so I began asking other people with badges and that was how I got around. I did manage to buy a lot of Christmas presents and wound up spending a lot more money than I expected."

Mari's daughter wanted to go out more at night but didn't feel she could "just walk into a party." She also didn't understand where everything was. This seemed to be a theme this year; I suspect this happens when first-timers walk around the Con without using guides and blogs to find out what's happening and where. She thought she would just run into things, but only found the FX and Cosmos and Adult Swim activations behind the Con.

Despite my warning them, they were shocked by the lines and ultimately dissuaded by them for some top panels and events. I think I failed them by not explaining that even super long lines can fit into rooms more easily than you think. Seeing hundreds of people waiting for your panel can feel discouraging until you remember that room seats more than a thousand.

They were some of the most enthusiastic first-timers I met and the most committed to 2019. 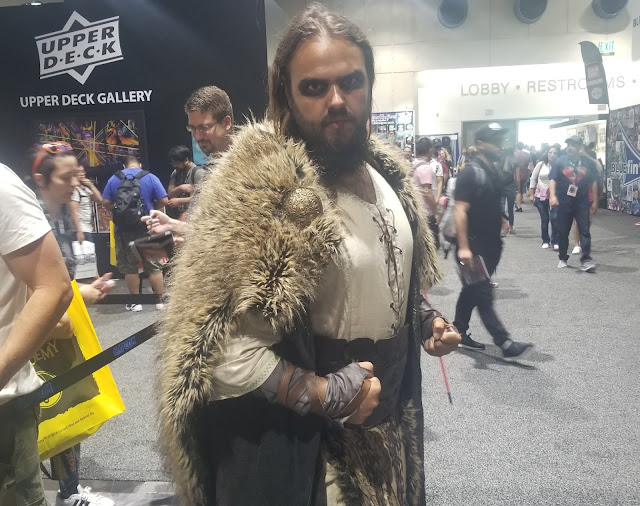 
JT's friend is an SDCC veteran who not only got him a Preview Night badge, but was able to steer him around the Con. Because of that, he made smart choices so they didn't waste a lot of time on lines for dud offsites and panels. He liked some of the gaming and animation panels but did not get into My Hero Academia as he hoped.

"This is not the Con for animation fans. Not if you are deep into it. The Crunchyroll panel was good but we're going to CRX 2018 in September so we'd see the previews anyhow."

Like Sean, his other disappointment was the nightlife. He had the impression that SDCC is full of opportunities to gay it up and then he arrived and well, it wasn't. It's true that local LGB bars used to throw more Con-themed events but even so, San Diego Pride the weekend before is really the time to come for that.

JT is the other first-timer who is definitely not coming back. "I feel like there are so many Cons now that the attractions and guests get spread too thin and it's harder and harder to find that one super Con that offers everything. I did think San Diego would have all this special stuff but while it's larger than other Cons it's not more unique than other Cons."

As you can probably tell, both Chris and JT are experienced Comic-Con goers, unlike my other first-timers. That seems to have colored their feelings about SDCC.

Zach and Katie were those rare first-timers who had no SDCC friends and no buying group assistance, but landed four-day badges in their first badge sale. In the following months, they learned how lucky they were - but also heard dire things about the hotel sale. So they booked a downtown room on their own at full rate.

Here's why: "I have an autoimmune disease and get tired easy. We didn't want to be too far away. Even so we had no idea how much energy it would take just walking to events and the convention center. And there was nowhere to rest so I would go into random panels just to sit down for a while. Friday AND Saturday night we went to bed early. I'm 31 but I felt like an old man! Next year we're going to Uber more and use those pedi cabs so I'm not busted by dinner."

Overall, they found Comic-Con "amazing" with "great energy" and thought most attendees were "such happy people, always willing to answer our questions." While they didn't get into every panel they wanted to, and were too tired to do as much as they hoped, they came away appreciating the camaraderie of the Comic-Con spirit.

They can't wait to go back next year.

Despite being her first SDCC, Brea knew exactly where she wanted to go: the Her Universe fashion show. "It was the highlight of my trip." She bought a jacket with what I believe are little anime characters on it (hard to tell from photo but it's pretty) and went to the Horton to see the My Neighbor Totoro screening. "I thought the show floor would be more about geek stuff, like a comic or collectible shop, so I was surprised by all the jewelry and clothes and old Hollywood booths. I thought I wouldn't be enough of a nerd to go but it didn't seem very nerd-oriented at all! I was also surprised to see as many women as men."

Brea's confidence was also bolstered by the cosplay she saw - specifically by the range of professionals and people who are just having fun with it. "I was afraid to make a fool of myself by dressing up as Wonder Woman, because I thought people would roll their eyes at me or I'd get it wrong. I will dress up next year for sure."

If there was one downer for Brea's trip, it was her hotel - a distant Best Western. "We heard it was almost impossible to get a hotel room so we did the Early Bird Sale to be safe. But it really sucked having to take shuttles back and forth and it restricted what we could do. I'd like to stay downtown if we go back." Good luck with that, Brea.

Sara almost didn't go to SDCC - I actually had to talk her into it. She thought one day (Thursday) wouldn't be worth it; I told her it would and she could do offsites on Friday, which is plenty of Con for anyone. She finally took the train down.

Her thoughts: "I'm glad I came. It's a bucket list kind of thing and I'm glad to have experienced it. However, the lines are just too long for the outside things like The Walking Dead and Jack Ryan. I didn't have time for that."

Some of the staffers or security guards were apparently rude to her and she thought the attendees kept pushing her in the Exhibit Hall. I think that's just the nature of the crowd. She also thought there should be more lounge areas for attendees and more meet-ups. Her other big complaint was the food inside the convention center being lousy. That tells you just how much of a first-timer to this type of event she is; crowds, overpriced pretzels and sullen staffers are par for the course.

Sara's current plan is to go back next year on Friday morning and do the entire weekend.

And those are my first-timers for 2018. I'm done talking about San Diego Comic-Con until, oh, Returning Registration. Which may not be that far away - so stay prepared. It's never really over.