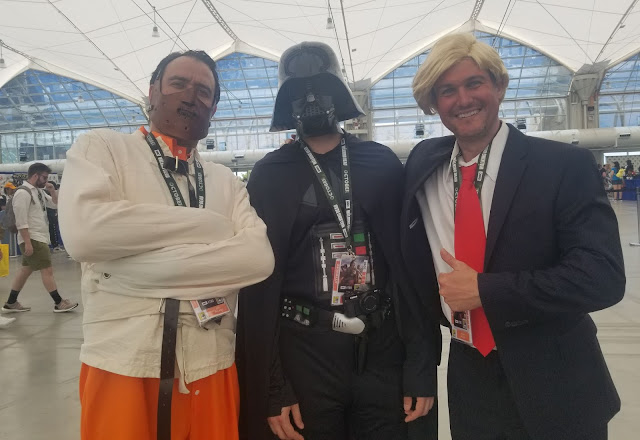 Remember those days when SDCC felt like a fever? You caught it and then you burned to do every offsite and see every Hall H trailer and go to every party. You prepared for it all year. No matter how stressful the badge sales and hotel reservations were, San Diego Comic-Con always seemed to deliver once you arrived. And it was a fever that could sustain itself for years.

But is that still true? Because it seems to me our collective fever is cooling off. More than any other year, I heard a lot of misgivings and grumblings - namely about the lack of studio presence but also about a shared sense that we attendees weren't being catered to like we had been in the past. Superfans have always liked that feeling that Hollywood needed their fandom - that Marvel or HBO showed up at SDCC in part as a token of appreciation. Here, have this autograph, this t-shirt, this photo of you with a zombie or dragon. That's the kind of experience a lot of attendees crave at SDCC and there's no denying much of it has gone away.

There was a quiet to Comic-Con this year. On Friday someone said to me, "Every night feels like Tuesday night." He meant that there was a persistent feeling that Comic-Con was about to start, that we'd lurch into the real show the next day. But that subdued feeling was the real show. 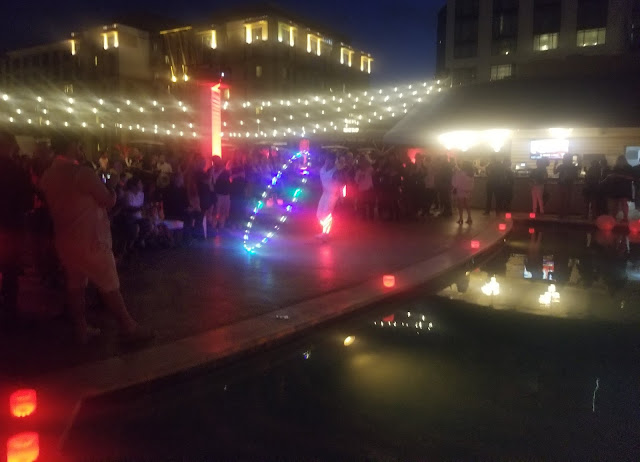 If it sounds like I'm complaining, I'm not. I had a good Con. My inner Eeyore was strong starting out but I wound up enjoying my panels and making some new friends. And I'm not alone - quite a few attendees loved the shorter lines, the easier access to panels, the extra hours they had every day that they used to spend chasing other things. Even the Gaslamp felt oddly empty. (I was in the Whiskey House one night where it was almost eerily slow, to the point you never would have believed it was Comic-Con outside.)

But other attendees felt deprived of the bombast and glory they used to soak up for hours on end in Hall H or Ballroom 20; some (okay, many) were peeved over not getting any exclusives and quite a few reported boredom with the offsites. Others (I'm in this camp) just didn't find much they wanted to buy in the Exhibit Hall. Friends who normally do a decent amount of networking and minor deal making at SDCC told me they talked to barely anyone, accomplished little.

But even if there was a hollowness this year, I don't think it's necessarily fatal or permanent. This might have just been an off year. We've known for a while that the marketing ROI wasn't great for Comic-Con and some studios and publishers were cutting back on the swag and events. And with some of the bigger players stepping down, others will have an opportunity to step up. SDCC will continue to evolve. If you've been going for a while, you know a sense of ownership over this Con is futile - change is inevitable and some of the upcoming changes may be welcome ones. 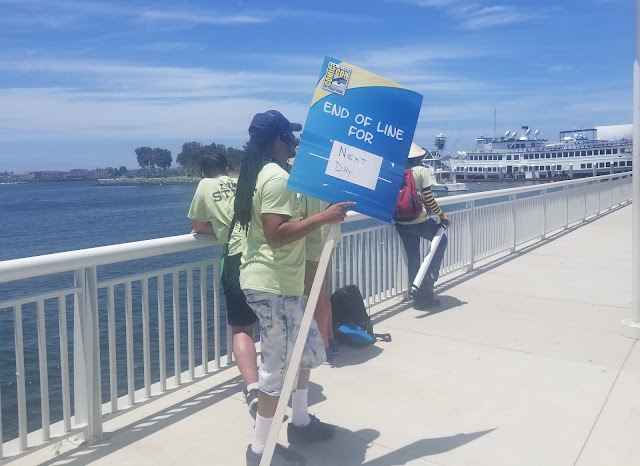 You may disagree, but I thought the quality was still there. You may not have gone to a Game of Thrones panel but you certainly had your pick of various shows and upcoming films to bask in. There were the usual creative how-to panels (although I think the number of questing young writers and artists that go to SDCC specifically for networking/panels has slackened) and the science panels were decent. My friends were happy with the kid-oriented offerings.

And let's face it - the lines were beyond friendly. We still had them, especially for Indigo and Hall H at times, but overall this was a very accessible year. I overestimated my need to line up several times. However, there were cases when CCI apparently underestimated the need for a bigger room. I heard several complaints about the Black Panther Costume Design panel, which was scheduled in a room for 280 - and then over 1,000 attendees lined up.

If there's any complaint to be made, it's that maybe we see too many of the same panels each year. I think SDCC could use some new blood and new topics.

Oh look, James Gunn was fired from the Guardians franchise for tasteless pedo jokes on Twitter from a long time ago. This didn't actually seem much of a controversy, perhaps because attendees already have controversy fatigue and were just looking to enjoy Comic-Con. In fact, the people I know were more perturbed by Johnny Depp's surprise appearance and the attendee who creepily asked Amber Heard to undo his bondage outfit during Aquaman Q and A.

We're getting a feature-length movie of Steven Universe. That's nice. And remember how Star Wars: Clone Wars got cancelled? It's coming back. We also may be getting a reboot of Buffy The Vampire Slayer.

On the trailer front: Aquaman's trailer was wildly anticipated - but didn't surprise much. Nightflyers and Disenchantment seemed to get mixed reviews. However, Deadly Class, Shazam and Godzilla all seemed to get people jazzed. So did footage from Venom and It Part 2.

I'm not sure why everyone seemed stunned that Andrew Lincoln/Rick is leaving The Walking Dead. Didn't we already know that?


Some people seemed really appreciative of the drunk Rick and Morty show behind the convention center - and other people didn't.

Line controversies! Despite lines being mostly easier this year, SDCC was not without its rumors and complaints. What I heard: some panels didn't have an ADA line; some ADA lines were formed and then forgotten; attendees were kept out of Hall H despite empty seats; attendees cut in front of all the good people who waited obediently in line and nothing was done about it!

Comic book news: I'll do a separate post on that.

Yawn. I mean, some were good. Some were humdrum. The Taco Bell experience should serve as a lesson to really understand what you're waiting for before you wait for hours - because in this case, it wasn't much. The Castle Rock house supposedly wasn't as scary as people wanted (despite passing it 6 times, I never went in) and people seemed to do the Adult Swim park and Cosmos dome without much feeling either way. FX usually generates middling grades with their AHS and other activations on the Hilton Bayfront lawn and that was the case this year. I heard mixed reports on Jack Ryan and the Walking Dead and Cartman's Escape Room.

As for official parties, I only went to the Mars/National Geographic party, which was good. The others seemed to be business as usual based on what I heard. 2 of my first-timers adorably thought these parties would be full of celebrities, so apparently I failed to adequately distinguish for them between the actual Hollywood parties (that most of us will never get into) and the parties for attendees which are - surprise! - full of the same people you saw in the Exhibit Hall that day, but now with a DJ and special lighting.

I do feel Conan was the MVP of the Con. Their different TeamCocoHouse offerings gave attendees something to do if they didn't get tickets to the tapings. And while many people are disappointed about not getting tickets, at least the team didn't repeat the mistakes of last year and leave people lined up pointlessly for hours/overnight. That said, when I look at who got tickets (sometimes for every show they requested) and who didn't (year after year now), it's hard not to notice a pattern. I looked around at the Friday audience and it did seem to be a younger crowd than you traditionally see at the Con overall. 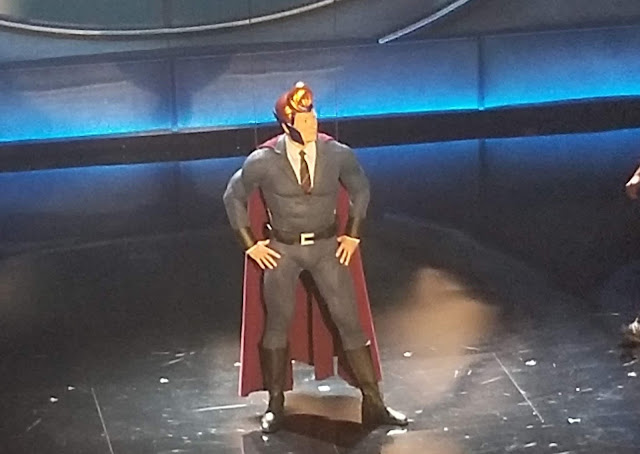 The Future of Comic-Con

Overall, I think San Diego Comic-Con is finding its feet again. Its original heydey as a major geek destination rolled into years as a pop culture/celebrity worship fest - and now it may be settling into something balanced between the two. I don't think Hollywood will completely withdraw. I think our days of being drenched in swag and surprise concerts and elaborate activations may be over, but we'll still receive a more mitigated version of that. And if SDCC regains a reputation as a more navigable, nerdy experience, some of the comic book nerds and gamers and collectors who've walked away may come back. (Well, probably not the collectors, not anytime soon.)

From my perspective, this shift is a good thing for those of us who'd like an easier badge and hotel sale, less anxiety and more chill. But I know some of you don't like it.

For the past few years, I've heard many nerds talk about Emerald City Comicon and Dragon Con as their new favored Cons. However, in 2018, I'm hearing more mainstream attendees talk about New York as their new target. I thought it was just my friends at first but at the Con this weekend, multiple strangers all said the same thing - they're looking eastward at ReedPOP's behemoth convention. Partly that's the greater ease in nabbing a badge and room, but it's also a matter of being attracted by the sheer size and spectacle of New York Comic Con - which is the allure San Diego used to have a monopoly on. 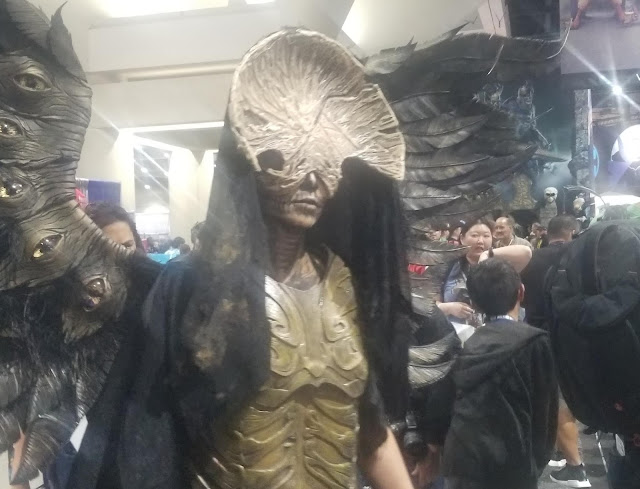 In many ways, there was a ghostly quality to this year. If you remember the old days, San Diego Comic-Con felt like a haunted house. You could still feel how it used to be, but that old magic was more of a phantom than anything tangible. You had to appreciate what was available and move on.

I still think SDCC has a lot to offer and I'm still looking forward to next year. If you're not, I understand - but I hope you do find something else that thrills you just as much. And I hope that everyone remembers that Comic-Con may not always dish up exactly what you hoped for, but it will always offer other appealing experiences. Sometimes it's just a matter of leaving your comfort zone behind to find them.

See you at Returning Registration, nerds.
Posted by Valerie