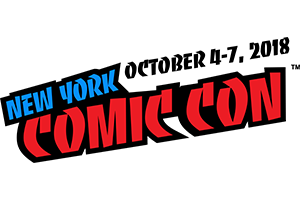 In four days, the general ticket sale for New York Comic Con will go live. You may know this if you're one of many restless SDCC attendees who've decided to seek more Con action in other cities. I've been hearing NYCC mentioned a lot the last few weeks - but often in a vague, not-terribly-well-informed way. So here are a few facts and opinions on buying NYCC tickets.

Is NYCC worth going to?

Yes. But it is different from San Diego, so don't view it as its East Coast twin. I know a lot of people love that feeling of immersion as they walk around the Gaslamp and hit various activations or take pictures of cosplayers. You won't have that exact experience in New York - the Con doesn't engulf the city in the same way. And you're less likely to see celebrities out and about.

However, there are more events to go to - game nights, concerts, comedy shows, benefits, poetry readings, live art shows, you name it. "Super Week" can actually offer too much of a good thing. There's also a more sophisticated bent to some events than you'd see in San Diego. Some are more hipster, others more mainstream. Basically, you'll have your choice of nightlife - whether they're official Con activities or not.

And the programming at NYCC has really improved over the years. On a Hollywood level, this Con is willing to expand the boundaries of who and what it showcases - you'll see movies and TV shows that you won't at SDCC. I find San Diego panels to still be more satisfying but that's me; most people will find something they like.

On a comics level, I'd say NYCC has the edge.


Is NYCC bigger than SDCC?

These Cons have gotten out their rulers time and again to argue about who has what attendance numbers and how those numbers are calculated. I think right now it's accepted that NYCC has more attendees but that's only because they can accommodate more - if SDCC could sell badges to everyone who wanted one, I believe they'd be biggest. All that matters is yes, they're both apex Cons.


Is it hard to get a ticket?

Not as hard as SDCC but getting there. You do need to be prepared, but your preparation outweighs luck. You'll get in if you work for it.


Is it hard to get a hotel room?

No. It's New York. And prices are reasonable.


How do I get a ticket for this year?

You won't, most likely. Just as SDCC has "Member IDs," NYCC has "Fan Verification." If you didn't already complete your profile, you can't take part in the upcoming sale. Fan Verification will open back up and you can then buy any remaining tickets. But I wouldn't count on getting a full ride.


So should I skip SDCC next year and just do NYCC?

No, I'm not saying that. San Diego has a charm all its own. Plus next year it turns 50! There should be some special celebrations afoot.

I am saying that if you really want a big Con experience, consider NYCC - especially if you're in that half of that country. I know a lot of you are done with the SDCC badge sale stress, the hotel room situation and what this year feels like a lackluster studio presence. This week's ConanCon results have also upset a number of attendees. If San Diego is no longer working for you, NYCC is a good place to sow the seeds of your future attendance. Because like SDCC, it's something to plan in advance.