How will you spend your last day at Comic-Con? 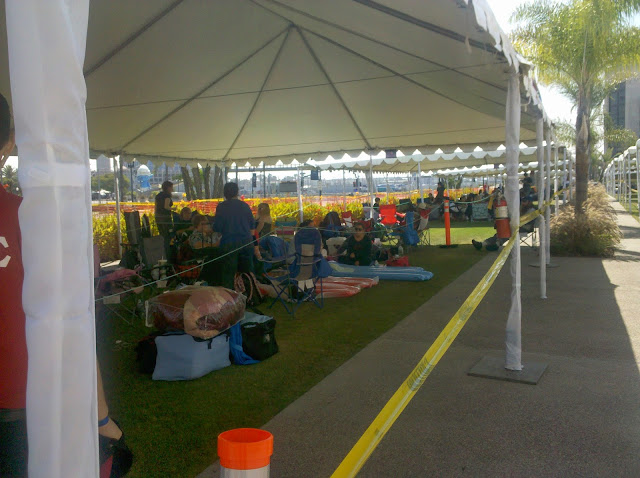 Two weeks from tonight, the San Diego Convention Center will close its doors to you and you'll be left to plot and hope and hoodoo your way into a 2019 badge. Hard to believe, isn't it? On the one hand, we can't say Comic-Con came up fast this year when we've had our badges since last year - but on the other hand, this protracted waiting has altered my inner clock and probably some of yours.

Let's look at Sunday programming. First-timers, Sunday is known for a few things - there are a lot of panels and activities for children, there's a slightly lighter schedule overall, and there are also plenty of sweet deals to be had in the Exhibit Hall. It's also the day Hall H turns into a magnet for several obsessive fandoms, like Supernatural.

Hall H brings you Riverdale, Supernatural, Mayans MC/Sons of Anarchy and Legion. Many, many attendees will spend all their Hall H capital on this day so you'll really need to be prepared if you want to get in - never mind get a good seat.

So many appealing premieres in 6BCF! Scooby Doo and the Gourmet Ghost kicks off the day at 10 with real celebrity chef voice actors. DC Super Hero Girls: Legend of Atlantis premiers at 12:15 and that's followed by Aquaman: Rage of Atlantis at 1:45 pm. Everyone there will get an exclusive mini LEGO figure.

Super Asian America talks about the gains made in Hollywood at 2:45 in 5AB.

Westworld science and the mysteries of human nature will be discussed in the Marriott at 3 pm.

Finally, you can end the day with Buffy's musical episode at 3:45 in room 6BCF.

Are your kids ready to break out their best costumes? Go to the Indigo Ballroom at 11:30 for the Cartoon Network Costume Ball, with prizes, activities and clips from favorite shows.

Costuming and Cosplay Support for the Mature Player is in the Marriott at noon. This sounds like the broadest panel topic ever, promising to cover the history of comic culture, dating, bullying in your community, family and oh yes, cosplay.

If you're a shipper - regardless of whether your ardor applies to TV shows, books, gaming or movies - you'll want to go to the Marriott at 2 to talk about "how psychological factors influence character pairing preferences."

Diversity in tech and gaming gets examined at 2 in 24ABC.


The annual Winner Twins panel on How to Create Your Own Novel is back at 10:30 in room 8.

Kids of all ages get a manga tutorial at noon in room 11.

If you want to brush up your interviewing skills, go to Proper Pitching and Promoting at 1 pm in room 2.

Are your bambinos interested in drawing cartoon characters? There's a workshop for them in room 11 at 2.

If you're trying to make a creative career happen but have limited free time, report to 24ABC at 4 pm for the annual panel, Full Time Creative Work on a Part Time Schedule.

And if you're a game dev or writer trying to create effective VR narratives, go to 28DE at 4 pm.

The Beatles: Yellow Submarine is now a graphic novel. Room 25ABC at 10:00.

Or you can pay homage to Jack Kirby at 10 in room 5AB.

You can unleash your X-Men love in at 11:15 in room 5AB and get a special variant comic.

Social justice warriors and comics: it's the panel you've been waiting for. 11:30 am in room 2.

Your kids can yell out suggestions to artists who will draw their wishes at 1:30 in 23ABC.

What's the connection between mental health and comics? You can find out in room 2 at 2:30.

A pretty cool panel closes out the day: the comic book origins of Black Panther. 4:00 in 32AB.

The Christian Comic Arts Society will talk about their faith at 10:00 in 28DE.

If you haven't yet had enough panels on how to make a living being nerdy, there's another one in the Marriott at 10.

This is intriguing: are you burning with curiosity about the Comic-Con Museum? You can get a look at it by going to room 29AB at noon.

And finally, we have what some might call the most important panel of SDCC - Talkback, where CCI president John Rogers invites your most candid feedback. You can give him the gift of honesty at 3:30 in 23ABC.


So - the verdict is in and yes, this is a mild year. Frankly, I'm all about it. But if you're not, remember that next year is San Diego Comic-Con's 50th anniversary - and I'm sure you'll get all kinds of flash and dazzle then. For now, enjoy the fact that you'll probably encounter shorter lines and have more time to spend with your friends.
Posted by Valerie