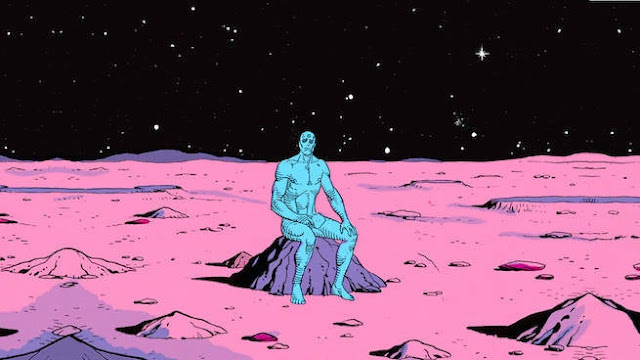 Below is a modification of something I wrote right before our last SDCC. It occurred to me it's more relevant this year, because I keep encountering people who are going to Comic-Con alone. A lot of them planned on attending with friends who've lost interest or gained other responsibilities over the last 3 years. One person said he didn't want to go by himself and might cancel. Others are going, but facing an SDCC where they have less spending money (paying the entire hotel bill themselves) and no one to go out with at night.
None of this is a tragedy. Going to SDCC by yourself can be awesome. No compromises, no roommates keeping you awake all night, and full freedom to change plans and priorities at the last second. And best of all, you are far more likely to meet new people and have new adventures.
After the last time I posted on this topic, some people emailed me and said they went solo to Comic-Con year after year. A lot of them disagreed with me and said it wasn't great at all. Some said no one talked to them at SDCC, that they expected to meet their tribe there but felt surrounded by cliques who ignored them. There was considerable sadness, self-blame and cynicism. So I wanted to talk about it again.

First of all, a lot of attendees go to SDCC by themselves.
You wouldn't know this from the 8 jillion happy group photos all over Instagram, but lots of attendees fly solo. People take the train down from LA or fly in from all over the country, other countries. There are a few reasons for this:
Regardless of what category you fall into, here are a few tips that might help.


But don't bring someone just for the sake of companionship.

You may disagree with this. But if your current paramour says "I want to go!" even though they're not into Con stuff at all - don't listen to them. They're actually envisioning a trip where you do SDCC for a few hours every day and then take off with them to go surfing or visit their college friend in Carlsbad. I've dated so many people who think this is reasonable. Outsiders do not get how all consuming Comic-Con is and they get impatient when you dive in and don't come up for air.

Now - I have seen a few people "flip" their SO during the Con. But the SO has to be willing to explore the possibilities.


Talk to people once you're there.
Oh, you hate small talk? So do I. But SDCC works this mysterious transformation where everyone somehow easily converses with everyone else. There's always something to talk about - your hotel room screwup, a drunk celebrity in your elevator, the inevitable gossip about badge or wristband fraud, the piercing injustice of a Hasbro exclusives line. Just participating in these conversations (and they will spring up around you) can help you make interesting connections. Remember - these people share your interests. This isn't like being forced to talk to your coworkers at the office Christmas party. And there are no burdensome social obligations since you'll never see them again.

You'll probably feel awkward walking in but remember most everyone else there is a stranger too. This includes people who "know" each other online. Meeting your favorite forum or Twitter friends in real life can feel even weirder than meeting a regular stranger. No one is what you expect! So just roll with it and see what happens. You will usually click with at least one person there, if not several. And don't worry about the "odd one" - it's Comic-Con.

If you're convinced you have zero social skills or appealing traits, force yourself to make conversation.

Several attendees have confessed to me that they are wretched souls scorned by all, and they're doomed to wander Comic-Con alone. They were sure I couldn't possibly understand how hard it was for them. No doubt they're right on that score, but I do know that socially handicapped people need to practice to get better. And you never have to see any attendees again, even if they flee in horror from you. Which they won't. Use SDCC as batting practice.


Appreciate the upside of being alone.
The first half of my SDCC existence was spent with my ex who, may she rest in peace, put up roadblocks constantly to my Comic-Con joy. She wanted to stay in when I wanted to go to a party. She complained about my panel choices but refused to leave my side. She drank too much and got so sick we had to go home early. Etc. You'll hear far more grim stories from some people in tightly-knit groups: fights, control issues, sacrificed event tickets and missed opportunities. Lasting bitterness. So enjoy your freedom and autonomy, go out on the prowl, and do exactly what you want. You are the envy of many.

Okay, I'm done. Last time I said that attendees have the power to make their Con as social as they want it to be - and I understand now why some people got miffed and felt I was dismissing their challenges. So I'll admit that's not entirely true, but I still believe attendees have more agency than they think here. Good luck and remember the words of French revolutionary General Danton: Boldness, more boldness, and always boldness.
I hope you make a new friend at Comic-Con.
Posted by Valerie