Are you eligible for Conan tickets? 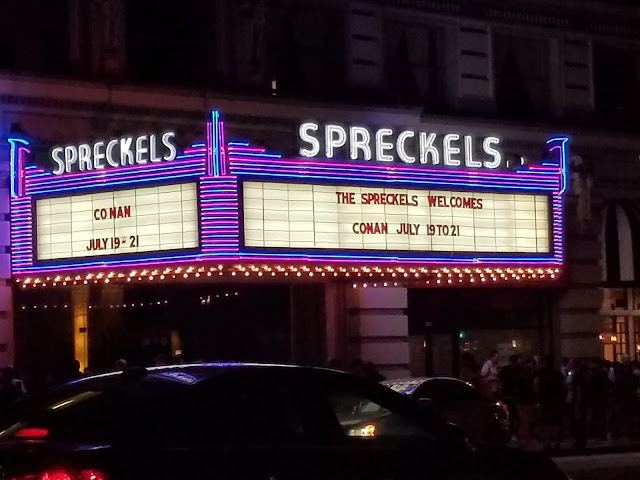 In the last few years, Conan O'Brien has become one of the biggest gets of San Diego Comic-Con. It's not just the amazing guests (X-Men, Game of Thrones, Suicide Squad, Silicon Valley and others) or the chance to dance onstage like a fool on TV. It's not even the Conan Funko Pops, which have become such a coveted item that my AC repair guy was struck dumb when he spotted one in my house. It's also one of the more fun things to do at the Con with your friends.

But you have to be prepared! Getting tickets is tough. Here's a primer if you've never been and some tips that might help even if you have.

Conan tapes several shows in San Diego during the Con. Once you have tickets, you can tell your mom to watch Conan on the appropriate night which lets her brag to her friends that you were on TV, which might help her see all your SDCC tomfoolery in a new light.

During the taping, shirts will be thrown into the audience, you'll be encouraged to holler and cheer till your throat is hoarse, sparkling celebrities will take a seat on stage, and then it will all end. On your way out you'll be handed a Funko Pop. Desperate collectors and flippers will sidle up to you and creepily whisper bids in your ear for those Pops. You'll either sell yours off and regret it later or wisely hang onto it.

The timing: usually you need to line up super early in the morning (I arrived at 6:30 am one year and got a nosebleed seat) to get your wristband. You'll still be able to hit the Con when the Exhibit Hall doors open or shortly thereafter. Then you'll return to the venue that afternoon and be let into the theatre. The whole shebang is over by 5:30 or so.

That said - this is a consuming affair. Getting in line that morning means skipping some other Con line and its panel/event. Having to go back in mid-afternoon trims another 3-4 hours off your day. In a world where every day presents Sophie's Choice in terms of choosing between Hall H, offsites, tournaments and other options, you need to be aware that ConanCon will control most of one day for you.

How to Get Tickets

It's not easy. But this is one event that prioritizes SDCC attendees, which is nice. 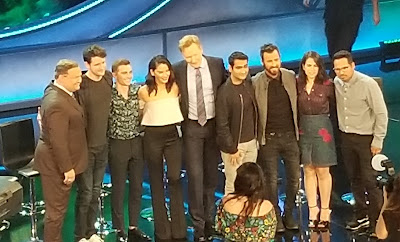 How to Go If You Don't Get Tickets

Despite everything I said above, people do bail on Conan tapings. SDCC is really tiring and sometimes they just don't have the energy for another event. Other times the Con programming for the day of their ticket sounds more appealing. So don't be afraid to ask around. People will have spare tickets.

You can also try standby. I feel like the first two years were better for this than last year. But it's worth trying if you're desperate - and you may not only get in, but get good seats, especially if you're in cosplay.


What You Can Do Right Now

ETA: ConanCon is now on Instagram and they say it'll be the spot to hear about celebrity guests, ticket updates and other tantalizing news - follow them at instagram.com/conancon/.